house kitchen
This post is a bit late as we've had the kitchen finished for a while, but its given me a chance to try out some of the features of the design so I can tell you how they worked out.  The only thing left to do is paint a small section of ceiling, so please ignore the blue masking tape! 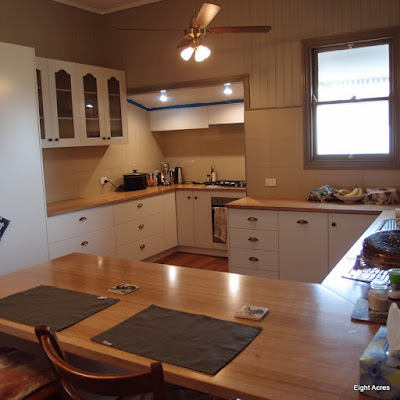 We had an cabinet maker design our kitchen after the wood floors were done.  I had already done a very rough design using the Ikea online kitchen design tool.  This confirmed to me that we would NOT be using Ikea as it did not fit well in the odd space of our kitchen!  But at least I was able to show that to the cabinet maker to get us started.  He measured everything and asked me way too many questions, and then went and drew it out in his software.  So unlike the bathroom, where I had full control of the design, I was not able to check everything as I only had the limited time when we I met with the cabinet maker to look at the design in detail.  Fortunately the kitchen turned out great, but I would have probably made changes in the laundry if I'd had a better look at it.  Too late now and nothing too terrible.  (I'll post about the laundry another day)

The kitchen turned into an odd shape because we took out the old pantry (which was built into the old woodstove alcove) and filled in the little window, so that it was part of the main room. The other issue was access to the roof space, through a hole in the middle of the kitchen ceiling, which we could have moved, but it is good there as its in the highest part of the roof, so we couldn't put an island bench right under that hole.  The previous kitchen had benches around the outside and a table in the middle, which meant walking across the room to use different spaces, not a good use of the room in my opinion.


After much rearranging and sticking masking tape on the floor and pulling it up again, we came up with the final idea.  The oven and cooktop are in the old pantry space, and bench and overhead cupboards continue around to the pantry, fridge and storage for bulky appliances.  Then in an C-shape on the opposite wall we have the sink and a "breakfast bar" with stools.


We went with a wooden benchtop made from panels of Tasmanian Oak.  It is still a laminated product (the panels are stuck together to make a full benchtop), so we had to have it finished in varnish, which we didn't really want, but it does need to be sealed properly and we didn't have time or energy to find suitable slabs of wood to use instead.  They had to be cut on a 45deg angle at the corners, which then dictated where the sink would fit.  The cupboard doors are MDF painted in matt Dulux "limed white quarter", which is just a few shades lighter than the walls (Dulux "tapestry beige"), although it looks nearly white.  I was nervous using white, as I didn't want to be cleaning fingerprints all the time, but a dark cupboard would have made the room too dark.

We have ended up with so much storage I actually have a few cupboards empty at the moment!  We haven't quite cleaned out the old kitchen, so I may find something to put in there soon, still working out where everything goes anyway.  I love having everything tucked away, and no clutter, the deep drawers are wonderful for finding everything easily, and Pete even knows where everything is already (he was still claiming that he didn't know where to put things after seven years in the old kitchen, but it was really just not wanting to brave the over-full cupboards).

The dishdrawer has been amazing!  We are so used to handwashing, its a lovely change to just pop everything in the dishdrawer (still handwashing pots and pans etc).  We don't even really need to run it once a day, except for a lack of cutlery (need to bring the rest over).  I am trialing some eco-dishwasher powder from Biome, but will also try making my own later.

We got an undersink filter than is integrated with the tap, so we only needed one tap.  The filter includes a UV lamp, which means it removes solids and then treats any bacteria/viruses etc.  Even though we have been drinking rainwater with just filters, its nice to know that the water is definitely clean!  I went for a high tap and deep sinks so virtually all of my big pots fit easily into the sink.

You may notice that there is no microwave.  We do own one, its probably 10 years old or more and lately we haven't been using it for much.  Actually I only use it to heat wheat packs.  I reheat food in pots on the cooktop, I defrost meat in a sink of hotwater (if not organised enough to get it out early), I don't know what else I would need it for.  I remember learning to "cook" in a microwave at school, we used it to cook bacon and sautee onions.  It was kind of a gimmick and I don't think our cooking teacher was really sure what to do with it either, but I persuaded my mum to get one too (sorry mum) and now I think they are a waste of kitchen space and a completely pointless appliance if you also have a cooktop and an oven!  This is apart from the fact that I'm totally convinced that they are safe to use. So rather than upgrade the old microwave to fit in with the nice new kitchen, we decided to put it in the shed and see if we can manage without it.

This is a link to an article with photos showing the evolution of kitchens.  I think the kitchen in this house was built in the 1950s (going from the style and the newspaper we found under the asbestos floor in the old pantry).  By then electric stoves were available, but I don't think country areas had electricity supply until the 1960s, so the original kitchen in this house would have had a woodstove.  Its kind of a combination of the 1950s kitchen, but with features from earlier kitchens.


So that is how the kitchen has turned out so far.  What do you think?

More posts about our house, from moving it to the property through to moving into the house (roughly in order):

A secondhand house for Cheslen Rise

A tour of our secondhand house (BEFORE)

The story of our secondhand house - Part 1

Choosing insulation for our house

Stairs for our secondhand house

Update on our house progress

Removing asbestos from our secondhand house

Another update on our house progress

How to choose exterior paint colours

And one more update on our house progress

How I designed our bathroom

How I designed our kitchen

Keeping our house warm in winter

Trimming old doors in our house

The story of our secondhand house – Part 2

More from: house kitchen
Back to Eight Acres - the blog