I have been writing about Nourishing Traditions, explaining how I have interpreted the chapters and the recipes that I've found useful.  Reading it again has been really good, I've noticed more recipes that I'd like to try and reminded myself of things I want to make as soon as various produce is in season.

This post is about the final chapters on snacks, desserts and super foods.

This chapter includes an interesting list of snacks for between meals eating.  The first snack is nuts, and I was very interested in the suggestion to soak and dry nuts before eating them.  I have never been a fan of nuts as they leave me feeling over full.  This is because of the enzyme inhibitors found in all nuts, seeds and grains.

I had half a packet of hazelnuts in the cupboard that I had never felt like eating, so I tried soaking them in brine and drying them in my dehydrator.  They came out really nice and I am able to eat them comfortably.  I also tried to make pepitas from raw pumpkin seeds, but they never went crunchy, just chewy, so I gave up on that one! 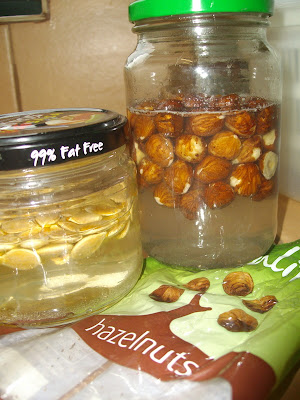 The other snacks include popcorn, apple slices (is that where McD's got it from?), crackers and cookies.  I can't be bothered with making cookies, but I have tried the crackers.  I think this is a good recipe as we buy an awful lot of crackers from the supermarket.

Although Nourishing Traditions recommends that we save dessert for treats, not more than once a week, it does commend the use of eggs, butter, cream and fruit in dessert.  It also recommends using natural sweeteners such as rapadura, honey and maple syrup rather than refined sugar.

The desserts include fruit based desserts, egg based custards, slices, ice cream, sherbet, pies, cakes and gourmet desserts.  The only recipe that I've used from this section is the custard, which came out beautifully with our free-range eggs.  I wish I'd noticed the merringe recipe when I had all those egg whites to use, using honey rather than sugar would be an interesting one to try.

Our typical dessert when we have too much cream (I know, how awful!) is apple crumble (or any other fruit that's going off, mango and berries work too!).  I suspect that the use of rolled oats would not be recommended, as they are not pre-soaked.  The only recipe close is the fruit cobbler, which used arrowroot or bulgar flour and almonds.  Will have to get some arrowroot flour and try this one!  The lemon moose is also on the must-try list when my lemon tree starts to fruit (and I have eggs again)!

The beverages in Nourishing Traditions are all based on either lacto-fermented fruit juices using whey or on wild yeast.  I have tried both a lacto-fermented citrus and ginger ale recipe, beet kvass, and the wild yeast ginger beer.  The ginger beer wasn't very successful and took so long to make the bug and then ferment the beer.

I find that I have plenty of whey, so I prefer the lacto-fermented recipes, and have made both of them a few times now.  They only take 3-4 days to ferment and then can be kept in the fridge and drunk straight or as a cordial, depending how strong they are, I also bottle them in Grolsh bottles and they go pleasingly fizzy.  I want to get hold of some sassafras root and make sarsaparilla (sars) or root beer, but I have no idea where to get it in Australia (even though people here drink a lot of sars).  I don't actually like the taste, it tastes like medicine, but Pete loves it, so I thought it would be fun to try. 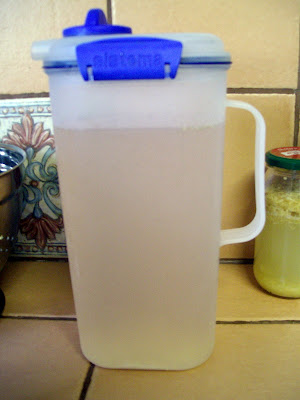 This chapter begins by saying that the tonics are medicinal rather than "epicureal" (which I had to google, it means "Devoted to the pursuit of sensual pleasure, especially to the enjoyment of good food and comfort"), so I guess Nourishing Traditions is saying that these foods don't taste nice but they're good for you!  Probably an appropriate warning for a chapter that includes raw liver drink!

They don't all look bad though, the recipes are all drinks, juices or broths.  I have tried beet kvass, and barley water, which were both very nice.

I'm not a big fan of buying lots of expensive processed products from health-food shops.  I like to think that because we are eating so much from our own organic garden that we shouldn't need to supplement much in the way of minerals.  The only things from this list that I do use are cod liver oil for vit A and D, butter (why not?!) and probiotics (we have kefir or yoghurt almost daily).  I suppose it depends on individual situations which of these products are affordable and useful.

And while we're on the subject of real food, I read an interesting article with a new conspiracy theory about the proliferation of convenience "food":


Here's another story, closer to the (complicated) truth: food companies, having developed all kinds of new canning and freezing methods while provisioning the troops during World War II, were keen to find a way to sell their new products to the domestic market after the war ended. Homemakers were suspicious at first (some early products, like powdered wine and freeze-dried cheese, never took off — imagine that!), but the companies persisted through clever marketing, convincing women that convenience foods were tasty and fun and easy and modern.

It makes sense, I like it!  It links well with the reason we use chemical fertilisers - lots of leftover ammonium nitrate from WWII as well.

Have you read Nourishing Traditions?  Do you use the recipes?

Here's the rest of the series: