Last weekend we got up early and prepared for a morning of killing poultry, not my ideal Saturday morning, but the time had come, we were going through too much food and not getting enough eggs.  We had bred new hens, so it was time for the eldest of the flock to go.  This is never easy, but its part of farming.

We don't keep the chickens for pets, so we always know that one day we will kill them.  If you're a chicken-lover, you might find this hard to read, but if you EAT chicken, even free-range or organic etc, you should read on, as I guarantee that home-killed chickens have a much nicer life and death than any commercially produced chicken, and you should take an interest in where you meat comes from.  This is put well on the site I linked to below:

Most people these days have become so removed from the reality of food production. As a result, we are practically helpless at providing our own food. We depend on the Industrial Providers to supply us with chicken, and just about everything else we eat. In recent years I’ve come to realize that it not necessarily a good thing to be so dependent, especially as food production has become so global. I want to become more food independent. When you grow your own food, it’s safer. It’s better for you. And it sure is a whole lot more satisfying.   http://www.butcherachicken.blogspot.com/ 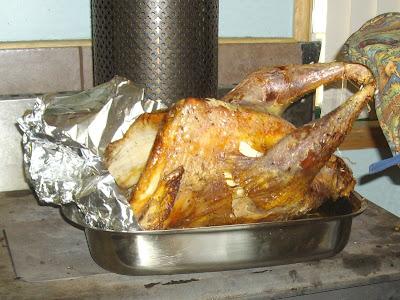 This time we had two turkey gobblers and three old hens to kill.  There's plenty of good explanations on the net (and another one) that go through the process step by step, and of course there's lots of different options depending on how many you're killing, how often, your budget etc.  I'm just going to tell you how we do it.

How to kill, pluck, gut and prepare poultry to eat

Things you will need to get organised before you start:

We killed three old chickens this time, so decided it was best to mince them, assuming that they would be very tough, so I just chopped off as much meat as possible, put it through the mincer and made about 3-4 kg of mince.  The two turkey gobblers were young and ready for roasting.
We put the first one straight into the oven, loosely following this recipe, and it came out perfectly.  The other one was bagged up and put in the freezer for later.  They weighed in at 6 kg, so we've been having turkey all week - as cold meat, pasta bake and fried rice :)
Do you butcher your own chickens?  Any tips?

More from: butcher chickens real food turkeys
Back to Eight Acres - the blog