beverage fermented ginger Nourishing Traditions real food
My mother in law gave us a big bag of ginger, some of it had sprouted, ready for planting, but there was plenty of pieces, so I decided to make ginger ale, no, ginger beer, I couldn't decide, so I made one batch of each to compare.  I can't wait to grow my own ginger so I can make these regularly (have planted the left over ginger in a large pot).

Ginger beer
Following the instructions in Nourishing Traditions, I grated lots of ginger.  In a jar I put 1.5 cups of rainwater, 2 teaspoons of ginger and 2 teaspoons of white sugar, put the lid on and left it on the bench.  I added 2 teaspoons each of ginger and sugar every morning for a week.  After a few days I could see bubbles forming (that was an exciting start to the day!). 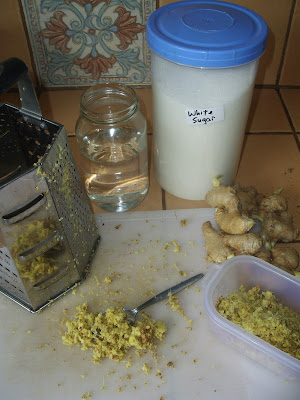 After a week, the bug was ready, and I was supposed to make it up to 8 L, adding sugar and lemon juice, however, I wasn't sure what vessel to use, as ginger has a reputation for explosiveness!  My husband had the bright idea of using one of our beer fermenters, but they are 20 L, so we decided to make it up to 20 L with extra sugar.  After a couple of days the fermenter hadn't started bubbling (so much for the explosion risk!) and we both worried that it wasn't working, so we added a packet of ale yeast that we had in the fridge.  Still no bubbling.  After a week my husband poured it into a keg and "gassed it up" using the CO2 bottle that we have for beer making.  With the keg in the beer fridge, its pretty convenient to pour a jug of ginger beer, however I don't think we really made it properly!  It tastes sweet and gingery, with only a hint of  alcohol or yeasty taste.  I want to try this one again without fiddling with the recipe.....

Ginger Ale
Ginger ale was much quicker to make and brew.  I just put 1.5 L of rainwater in a jug with 1/2 cup sugar, 1/4 cup lemon juice, 1/4 grated ginger and 1/4 cup whey and left the jug on the bench for 3 days, before putting it in the fridge.  The result is a very sweet, gingery drink, without any fizz.  I drink it diluted about half with water, and it is a lovely refreshing drink.  I think I prefer the ale, as it was quicker, less mess, didn't have to remember to feed a bug, and I felt that the benefits of the lactic acid bacteria were greater than with the ginger beer.  If you don't have whey from cheese making, you could use kefir whey (and if you don't have kefir whey, you should get some kefir!).
Do you make ginger beer?  Or ale?