As I posted a few weeks ago, I've been trying some fermented food recipes, but its been a nerve-wracking experience due to not knowing what these foods are supposed to taste like, I've just been trying to "trust my nose" and only eat things that don't smell bad!

We tried "lemon wine" at the cheese-making course, so at least I'd tried a fermented beverage.  We will go to another course to learn how to make this kind of fermented food when it comes to Murgon in Feb/March 2012, but I decided to try a recipe in Nourishing Traditions in the meantime.  Of course I also tried to modify it, as there wasn't exactly a recipe for lemon wine, more orange wine, but we had heaps of lemons from the neighbour's tree (two shopping bags) and a few mandarins that were on sale.

I juiced all the lemons and mandarins and ended up with: 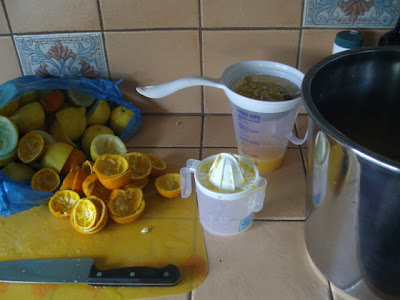 I added 1/2 cup of raw sugar to 1.5 L warm water and 0.5 L whey from cottage cheese and stirred it all into the lemon/orange juice. 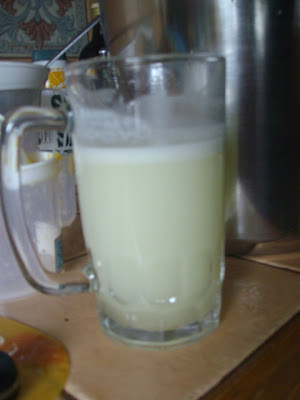 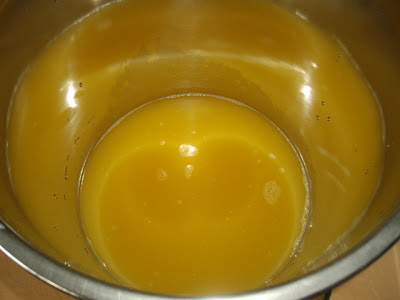 I bottled the brew into old Grolsch bottles (knew I was hoarding them for a reason) and put them in the beer fridge.  I think I should have added more sugar, this is seriously sour!  But ok mixed with water, a bit like drinking apple cider vinegar!  They should be nice as a refreshing drink over summer...... 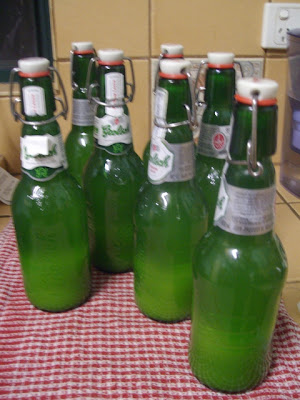