butter cheese cow dairy milk yoghurt
Now that we have Bella our house cow, we have the option of drinking raw whole milk instead of pasturised, homoginised supermarket milk.  In Australia it is illegal to sell raw milk, but its not illegal to drink raw milk from your own house cow.

As explained here, there are good reasons not to drink raw milk from commercial dairies.  These dairies are producing milk that is intended to be pasturised, there is usually lots of manure on the floor and lots of cows to milk, because the milk is going to be pasturised, so there's no need to take as much care as you would with your own house cow.  Some dairies are set up to produce raw milk, and these may take more care with the production of milk, so that its safe to drink in raw form, but in general I would be wary of commercial raw milk.


“If people let government decide what foods they eat and what medicines they take, their bodies will soon be in as sorry a state as are the souls of those who live under tyranny.”– Thomas Jefferson 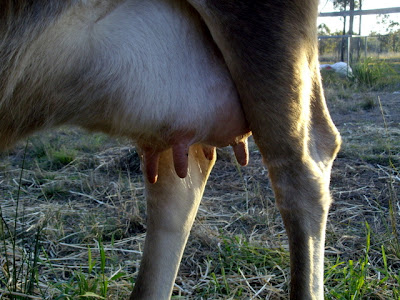 I believe that there are lots of good reasons to drink raw milk, as it contains enzymes and "good" microbes that help our digestion and immune system, but I really need to do some more reading on the subject.  I do have a lovely book called "The Healthy House Cow", by Marja Fitzgerald, which, in amongst the wonderfully wise cow advice and organic treatments and feeds, also talks about the benefits of raw milk.  But I think I need something more scientific to report to my readers, so I purchased some books on the subject and I'll report back soon!

For me its also a laziness thing, its so much easier to drink the milk raw than worry about pasteurising it!  I have tried to make raw milk yoghurt, and it hasn't worked.  That is so frustrating because now I have the tedious task of pasteurising the milk before making the yoghurt!  So far I have made cheese and butter from raw milk and its been fine.

Pete and I also went to a cheese-making course recently.  We chose to go to one which we knew would discuss raw milk, as some are very focused on the need for pasteurisation.  The course was run by Elisabeth Fekonia (see her website) and was in Brisbane, but she runs them all around QLD, check her calendar for one near you.  It was only for the day, so there wasn't much time, but she managed to show us the basics of cheddar, brie, yoghurt, kefir, butter and ghee.  She also explained the benefits of lactic fermentation and inspired me to FINALLY buy "Nourishing Traditions" as everyone keeps mentioning it (see my book list for more details).  The highlights for me were the opportunities to try kefir and buy some grains, as I had heard so much about it and would never have tried it otherwise.  I also got the chance to discuss raw milk yoghurt, which Elisabeth admitted she also had no luck with and preferred to just pasteurise the milk to ensure a good result.  This made me feel better about it!  She also explained that by adding the good bacteria in the yoghurt culture to pasteurised milk you're still making something very healthy, and raw milk isn't really necessary.  I did feel sorry for the other 20 or so people on the course who did not own a cow, as they would be looking at paying $5 a litre for raw "bath" milk, that's VERY expensive cheese!

So now I just need to find a balance between what is safe and healthy and what is tasty and easy to prepare!  Any thoughts, any good books on the subject, any experiences (good or bad) with raw milk???