book farm real food sustainable
Occasionally I imagine what would happen if Pete and I ended up on one of those reality TV cooking shows where you have to prepare a meal in your own home as a couple.  The first part of the show usually involves the couple rushing around the supermarket buying ingredients.  I wonder what they would think when most of our ingredients came from the garden or the freezer (no rushing required), would we be disqualified because we don't need to buy much to create a wonderful meal?


Dan Barber's book The Third Plate: Field Notes on the Future of Food

is about creating a sustainable meal.  His first plate was the conventional meat and three vege, his second plate was organic meat and three vege, but the third plate (the sustainable one) was a steak made from carrot, with a beef sauce, he goes on to develop this concept into an entire meal of plates.  You would think that a chef with a nose-to-tail farm-based restaurant wouldn't have to search for a sustainable plate, but throughout the book, Dan comes to realise that sustainability isn't so much about growing food for the table, more like using the food that's available, or eating what you can grow.

While I often read about farming and nutrition, I haven't read the chef's view before.  It was interesting to learn how different foods fit into cuisines and how chef's have influenced food culture and how we eat.  The book is split into four sections: Soil, Land, Sea and Seed.  The first section follows an organic grain grower and discovers the link between soil, flavour and good health.  It explains the organic approach compared to a conventional chemical farm.  The advantages of perennial plants over annual plants are discussed, however there remains an underlying assumption that we need to grow grains and that we need to plough.

In the section on Land, Dan visits a "natural" foi gras farmer in Spain, who fattens geese on acorns and lupins in the fields.  Foi gras is the fatty liver of a goose or duck, apparently it is a delicacy, but it usually involves cruelly force-feeding grain to the bird.  The irony is that we recently butchered some fat old hens.  When I gutted them I discarded their swollen fatty livers, not wanting to eat them, but this would have been similar to foi gras!  Yuck!  Anyway, the point of this section is that Dehesa region of Spain is a complex farm ecosystem of managed oak trees, pigs, sheep and geese, and part of the reason that it survives is that there is a cuisine associated with the area which supports all of these elements.  It did make me wonder whether even if we find a humane way to raise birds with inflammation of the liver, if we really SHOULD eat those livers, no matter how amazing they taste.  Mas Masumoto and his peaches also feature in this section (I heard about him already on this radio show).

The section on Sea involved a visit to a natural fish farm.  I had heard about this already through Dan's TedX talk and it really does sound like a great system.  The farmers there are producing fish what I think all farmers should be producing anything - working with natural systems to produce healthy animals with no chemicals and very little supplement feeding.  The comparison to a chef who was utilising unpopular "by-catch" fish was thought-provoking.  Which system is more sustainable?  I think the chef risks creating a market and demand for more wild fish, which cannot be sustained.  This is a problem with making use of a "waste" from a dirty industry, at first you think you're making the industry better by using the waste, but really you're just becoming more dependent on it (for example using fly ash from coal power stations as a cheap filler in cement).

Finally Dan visits seed breeders.  One breeder is only using heritage seeds and "landrace" to breed new varieties of grains.  He just keeps looking for unusual plants (taller or more seeds) and breeding from them to improve the crop for his climate and conditions.  This is much like how I breed seeds, except I breed for hardiness by just letting them self-seed....  The other breeder uses modern techniques to create hybrids, not genetic engineering, but just more selective and deliberate crosses than the landrace method.  More like choosing which rooster to keep with your hens so you get the cross you want.  Dan wonders whether die-hard support of heritage breed leaves us missing out on newly developed crosses, however he also observes that most new seed is created for attributes other than flavour.  I think this is why most people would prefer to save heritage breeds.  This section also describes the development of the modern wheat plant, and the green revolution.  It also touches on the importance of the farming community, that one farmer can't do it all, and farmers in a region need to work together to produce a sustainable system between them.

Dan says that "for most of human history meals came from foraged in-season food".  He suggests that a sustainable plate, must be part of a sustainable food culture or cuisine that values local, seasonal food.  Including "by-catch" (companion crops as well as fish) and foraged wild food.  I'm not convinced that we actually need chefs and cuisine to help create this third plate.  I challenged Pete to help me make a meal completely grown on our eight acre property.  We had roast rooster, with asian greens, peas, celery, broccoli and leaks cooked in chicken fat, sweet potato, dried herbs from the garden and gravy made from the dripping.  Followed with custard made from our cream and milk, eggs and honey.  The only external ingredients were a spoonful of cornflour for the gravy, homemade vanilla extract for the custard, strawberries from a road-side stall (I am going to work on growing these, mine are tiny!) and the honey was from the local market.  (However the chickens and cows were fed grain purchased from a neighbour, this is a work in progress).

We have got to the stage were the vast majority of what we eat is either produced on our property or from a local farmer, its pretty close to foraged in-season food!  I want everyone to know that its possible to eat like this and I don't need a chef to show me how to do it (although the book was very interesting and at 486 pages covered a wide range of topics relating to food and farming).  I encourage you to start a garden, get some chickens and think about what would be on your sustainable plate.  Even if its only a small proportion of your food, its still contributes by reducing waste, and empowering you to grow what you eat. 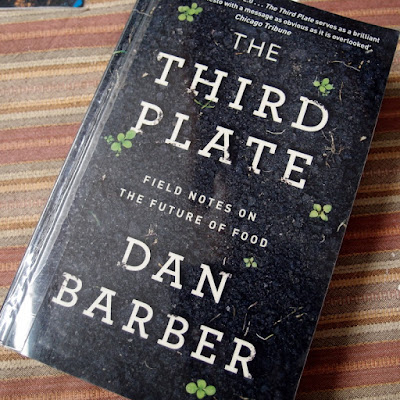 What's on your third plate?  Have you read it?  Are you interested?  See my Amazon link below (I get small percentage of any sales from that link, with no extra cost to you).


More from: book farm real food sustainable
Back to Eight Acres - the blog