book hunting real food
Have you thought about escaping from the modern food system?  Growing, foraging, hunting and cooking your own food rather than buying processed "food" from the supermarket?  I was sent a copy of Whole Larder Love by Rohan Anderson, and this is a book to help you to grow, gather, hunt and cook your way out of the modern food system.  Rohan also has a blog of the same name. 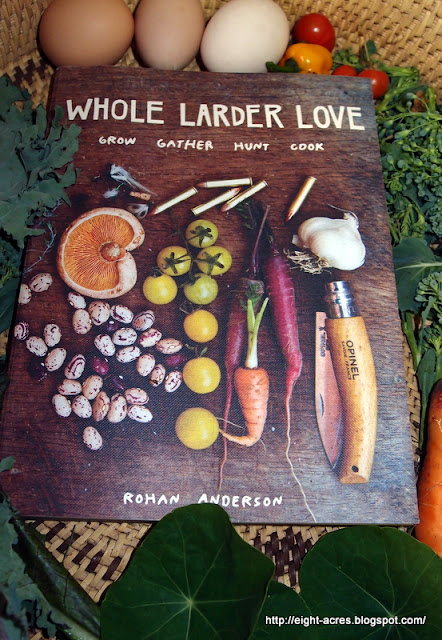 To me, the book has three aspects, the photos, the recipes and the information.  The photos are BEAUTIFUL, on every page there is an image of food, either ready to eat, or ready for harvesting.  Perfect for inspiring some hard work (gathering and then cooking the food).

The book is split into seven sections of recipes and information:
The thing that really interested me about this book was the hunting and foraging aspect.  As you know from my blog, I think I have garden and paddock sorted, but I would love to eat more wild foods.  Generally, I don't really follow recipes, so I would have liked to see more information in this book, and fewer recipes, but I realise that I'm a bit strange that way!  The few pages of information that are included, such as the page on skinning a rabbit, are really useful, but left me wanting more.  I haven't actually tested any of the recipes, but as soon as I manage to shoot a rabbit (this is pending me getting my gun licence, and then getting a gun, and then getting good enough to hit a rabbit), I am keen to try the Spanish Rabbit Legs.  Also when we eventually get our aquaponics working and grow some fish, the smoked fish instructions are great too.  And if I can find some mushrooms to forage, there are some delicious looking recipes for those (again, more foraging info would have helped).
I was a little concerned by the relish instructions, only because I just did that research on how to can, and I think that more information on sterilising the jars and the pros and cons of open-kettle vs. water bath canning should have been explained, just to cover the food safety risks.  Also the discussion on beef was somewhat lacking, Rohan says that he doesn't like to eat too much beef and lamb because other countries are clearing land to farm these animals.  Sure, but in Australia, if you buy beef and lamb it will be Aussie beef and lamb, and there's no new clearing going on.  If you choose local organic grass-fed you will be supporting a farmer who has a land management plan for improving their farmland.  We need to support local farmers who are doing a good job, and I thought Rohan overstated the problems with beef and lamb, although he did explain that he bought locally farmed free-range pork.  The main thing when buying farmed meat, is to find a local organic supplier and make sure you are happy with the way they are farming.
Overall, the lifestyle advocated by this book is analogous with my own and I enjoyed reading a slightly different perspective than most other self-sufficiency books, that usually focus on growing your own, rather than gathering your own.  Early on in the book Rohan sums up the reasons for changing the way we obtain food:

"The way that food is produced, shipped, and consumed globally has a negative impact on the environment, on our personal health, on local economies and communities, on our spiritual well-being, and on the quality and flavour of the food itself."  Whole Larder Love, Rohan Anderson

Rohan goes on to say (rather bravely I thought):

"I've always said that it's a privilege for us to eat meat, and if you honestly can't bring yourself to "acquire" your own meat, then you shouldn't eat it." Whole Larder Love, Rohan Anderson

I can't agree more, only because if you won't kill an animal yourself, how can you ask someone else to do it for you?  I know that not everyone has an opportunity to grow and kill their own meat, but if you do have that opportunity, you should take it.  You will appreciate the food so much more when you have had to accept where it came from.
What do you think?  Do you eat wild foods?  Do you grow your own?

More from: book hunting real food
Back to Eight Acres - the blog