I have been keeping my sourdough cake starter in the fridge and every couple of weeks I take it out and either use or discard half of the starter and refresh with flour, sugar and water.  The other day I really felt like pancakes, so I thought I'd try making sourdough pancakes.

I really just made up the recipe from the Edmonds cook book (so you could just use your normal pancake recipe), but left out the eggs and baking powder until right at the end, and added half my sourdough starter.  I made up the mixture in the morning and it was lovely and frothy by dinner time.  I added the egg and baking soda (instead of baking powder, as the mixture is already nicely acidic from the fermentation), and made the pancakes. 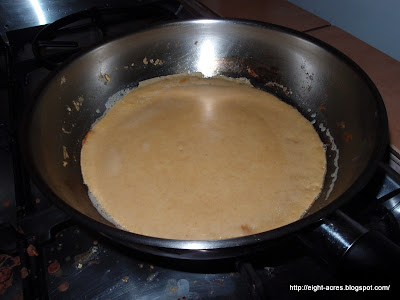 I usually like very thin pancakes, but I found that these tended to break if they were too thin, so I had to make them thicker.  The pancakes had a pleasant sourness, which was lovely with a drizzle of butter and honey (as I didn't have any maple syrup, I'm wondering if I can grow some maple trees after seeing them being tapped in so many North American blogs at the moment!). 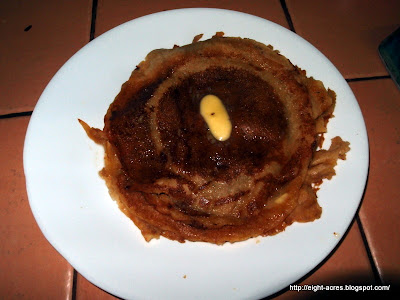 Don't forget, if you want to make your own starter, there are some links in the previous post, or try to find someone who can share their starter with you.  Have you used a sourdough cake starter?  Any recipe ideas to share?
Share Tweet +1