After reading Nourishing Traditions I was keen to try some of the recipes, but its a little scary when you haven't eaten these foods before.  Most of the recipes involve lactic fermentation.  This means that you leave something out on the kitchen bench, with some added whey from cream cheese or kefir, and wait for it to ferment. In our modern society, that's not something most people are really comfortable with.  We are told to put things in the fridge immediately, not leave them out on the bench for a few days!  I don't have a problem with the process, its just hard to get used to it and hard to know if you're doing it right or if you're going to get food poisoning.

But I was determined to be brave and try some of the recipes.  The only thing you can do in these situations is TRUST YOUR NOSE.  If it smells bad, don't eat it.  I find myself sniffing everything, deep sniffs, because things you make yourself don't come with best-before dates.  I've been sniffing the cream I skimmed off the milk a couple of weeks ago, the cream cheese I made, the olives we bought from the market......and the sauerkraut that I attempted recently.


I had all the ingredients at hand, so there was no excuses!  A cabbage, sour whey from making cream cheese, and salt.  All I need to do is combine them in a jar and let it ferment.  The actual steps I used are as follows: 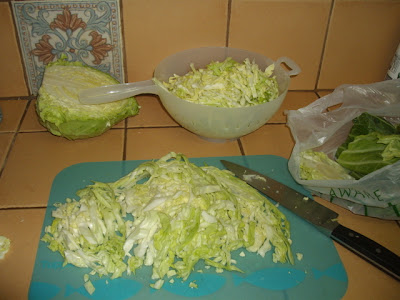 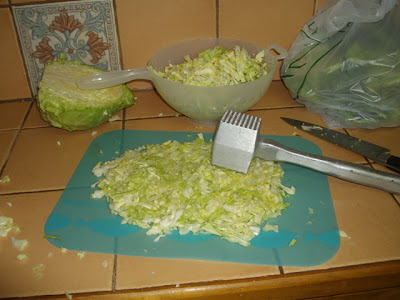 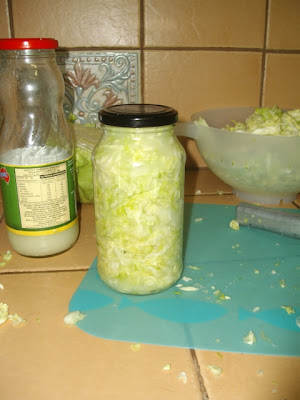 The fermented veges are supposed to be eaten as a garnish , like a chutney or sauce, to make a meat or vege dish more tasty.  Here's some with a nice tasty pork cutlet.