chickens feed
There are many options for feeding your chickens. For a while we thought the solution was chicken layer pellets, they are uniform, so the chickens don't pick through them, but you never really know what's in them, and they are usually a relatively expensive option.

We then started buying a nice mixed grain produced by our local stock feed store. Unfortunately our chickens are very picky, they don't seem to like wheat or sorghum, so these seeds were picked out while they ate the corn and the sunflowers. Seems like a waste when half the feed ends up on the ground, and just attracts mice. The chickens also tend to leave the fines in the bottom of the feeder, creating even more waste. 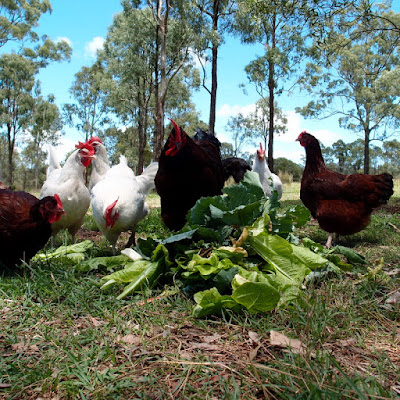 Then we decided that if they like corn and sunflowers so much, we should just feed them cracked corn and sunflower seeds. The guy at the stock feed store was worried that this would not be a complete food, however with the chickens free ranging, they should be picking up a lot of what they need out in the paddock, ideally we should only be supplementing the feed that they can find for themselves.

Its quite difficult to find information on chicken feed that's not targeted to industrial producers, or just too vague to make any decisions (like "use a layer mash"). Most industrial advice is about what you can get away with, the main strategy for increasing protein content (and pump out maximum eggs) is to add either animal products or soy. I have also seen a domestic chicken pellet with "yolk pigmenter" included, this is just a food colouring to make the yolks darker - a chicken with a healthy diet should lay eggs with naturally dark yellow yolks.

From one source I found out that a hen needs about 700 kJ of energy per day to produce eggs and to free-range, and about 18 g/day of protein.  A hen can achieve most of her energy and protein needs just from eating cracked corn (about 300g per hen per day), but by adding sunflowers to the diet, the total feed requirement reduces. For example feeding 50/50 cracked corn and sunflowers reduces the feed requirements to about 120g per hen per day. The ideal ratio depends on the price of sunflower seeds relative to cracked corn. The more sunflower seeds consumed, the less overall feed and overall energy needs to be consumed to achieve enough protein, so I think we should feed as much sunflower seeds as we can afford. This system resulted in much less food wasted, so even though buying cracked corn is more expensive than mixed grain, it worked out cheaper as we don't have to use as many bags per week.

Lately we have come to an even simpler system in which we feed the chickens the same milled grain as the cattle. That way we only have to keep one type of feed in storage and its suitable for all the animals. The grain is milled to a size where the chickens can’t really pick through and chose their favourite grains. Also any food spilt is safe for the cattle to eat when the chicken tractor is moved over. We still feed sunflower seeds as a treat in the afternoon, I don’t think we could stop even if we wanted to, as you just about can’t walk to the feed bins without being mobbed by a gang of chickens waiting for their afternoon treats. We store the milled grain in 200 L metal drums, with a layer of diatomaceous earth to keep the insects out. This is also safe for the animals to eat.

Ideally, the grain should just be a supplement to all the food that the chickens can find while free-ranging. They eat grass, weeds and any bugs that they find. We also grow a few bugs for treats and to feed to baby chicks. Eventually I would like to grow all the chicken feed and not have to buy grain at all.

Chickens need to eat some form of living protein because they need the amino acid methionine, which is not found in significant proportions in grains or legumes. The theory is that chickens are descended from naturally free-ranging jungle-dwelling birds (gallus gallus), which tend to get their protein from bugs. It is argued that a chicken free-ranging on pasture does not pick up as many bugs as a bird living in the jungle might, and therefore does not get enough protein from bugs, and so needs to be fed a "complete ration" containing either meat meal or a synthetic form of methionine. In addition, while gallus gallus lays only a few eggs per year, our modern hens lay close to one per day and have higher protein requirements.

Mealworms are one source of protein that you can grow for your chickens. Mealworms live in grain (which doesn’t quite help us to avoid grain, but they don’t need much). Mealworms convert that grain to higher protein feed just by feeding and growing, so its a way to increase the nutritional value of the grain. They also need the occasional carrot or apple to provide moisture, just replace it when its all eaten or gone mouldy. Compost worms are another option, especially if you are keeping a worm farm anyway, its very easy to dig around in the worm farm and grab a few worms for the chickens. Black Soldier Fly larvae are another option that can be set up around the chicken tractors as self-serve protein systems. I can’t get into the detail here, but there is plenty of information on the net about all of these options. Harvey Ussery also suggests in his book that you could hang a bucket of roadkill meat in the chicken coop and let the maggots fall out to feed the chickens! He calls it free-food from thin-air. There are certainly some clever ideas out there and we do not need to be constrained to buying expensive bags of feed from the produce store.
What do you feed your chickens?  Any clever ideas for free chicken food?
More from: chickens feed
Back to Eight Acres - the blog