book review raw milk
I never realised that raw milk was so controversial until after we got our house cow Bella and I found out that we couldn't share her milk.  I know most people get a house cow BECAUSE they want raw milk, but we were just interested in milk in general, I hadn't really thought about the fact that it would be raw.  We were happy to drink it raw and make cheese with the raw milk.  It was until I started reading Nourishing Traditions that I realised the benefits of raw milk and how lucky we were to have our own house cow.

If you are still trying to figure out what's going on with raw milk, this book covers everything.  I would be very surprised if there is a question that you have that is not covered by this book, although it is US-based, so there isn't any Australian specific information.  He covers the history of raw milk, the risks and benefits and making the decision to drink raw milk (he doesn't push raw milk, but advocates that everyone considers their individual situation).  Then how to get raw milk, how to check that its safe and how to discuss your decision with family. 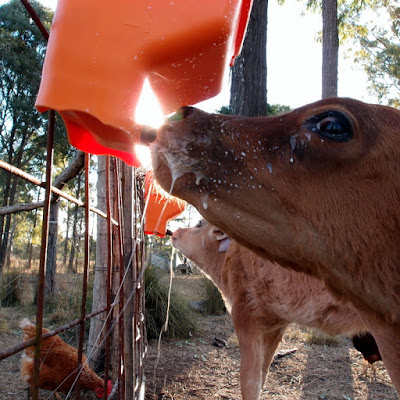 I think in Australia its even more difficult to get raw milk, as it is not legal for farmers to sell or share unpasteurised milk.  However, if you ask around you can probably find a source of milk from a sneaky farmer or "cosmetic" milk.  At least this book would help you to understand the risks and how to assess whether the milk is likely to be safe to drink.

Personally I am convinced that raw milk makes me feel better.  I actually didn't drink much milk at all before we got Bella, some weeks we wouldn't buy any milk, other weeks it would go off before we used a litre bottle.  When we got Bella (and then started milking Molly) we always have so much milk, I got used to having a raw milk and kefir smoothie daily.  So when both cows were dry recently we started buying milk from our local organic farm, and it was of course pasteurised.  I didn't realise how ill I was feeling until we started milking again and after a few weeks of raw milk I was back to normal.  I think I would rather have no milk than drink pasteurised milk.  My kefir agrees, it nearly died on the pasteurised milk, but is slowly regrowing in the raw milk.

If you're wondering about raw milk, I recommend reading this book, it will at least help you assess whether you want to try it and how you might get it.

Do you drink raw milk?

More from: book review raw milk
Back to Eight Acres - the blog