In 1974, an American, Larry Korn arrived at Masanobu Fukuoka's farm in Shikoku Japan, to begin an informal internship that culminated in him translating into English Fukuoka-san's book The One-Straw Revolution: An Introduction to Natural Farming (affiliate link).  The book was published in 1978 and Larry then hosted Fukuoka-san in the US and started his own business teaching natural farming techniques.  Now Larry has published his own book, One-Straw Revolutionary: The Philosophy and Work of Masanobu Fukuoka

(affiliate link). which is the tale of how "The One Straw Revolution" came to be.   I first heard about this book on the Root Simple Podcast here.

I reviewed "The One Straw Revolution" back here and I have been strongly influenced by the idea of "doing nothing" and observing nature.  I know several people who have read "One Straw Revolution" and really struggled with it.  I had to read it three times myself before I came close to understanding natural farming.  I think it also helped that I studied Japanese and spent some time in Japan while I was at high school, so Japanese culture was not completely foreign to me.  This book is distinctly Japanese and I think "One-Straw Revolutionary" goes some way to further explaining and translating the concepts for those who do not have experience with Japanese culture. 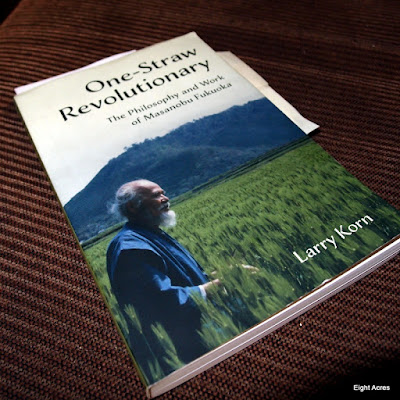 The first chapter of the book recaps Fukuoka-san's experience as described in "The One Straw Revolution", with more background and explanation.  The book then takes a tangent to explain the author's time in Japan before arriving at Fukuoka-san's farm.  This is interesting and helps to set the context of the Japanese culture and farming traditions.  Then the author explains how he arrived at Fukuoka-san's farm and spent two years there, finally translating Fukuoka-san's book with the help of other interns.  When Larry returned to the US he found a publisher for the book and later arranged for Fukuoka-san to visit the US, which is also described in detail.
Finally, Larry has several chapters contrasting Fukuoka-san's natural farming with other methods, including indigenous ways, traditional Japanese agriculture and organic and permaculture methods.

"'Modern society, on the other hand, has estranged itself from nature and lives in a world of its own intellectual creation.  It is based on the assumption that the world can only be understood through analytical thinking and the empiricism of  science.  This blocks people's access not only to the world as it actually is, but also to an understanding of nature as Mr Fukuoka experienced and tried so desperately to explain."

I regularly use Fukuoka-san's philosophy of "doing nothing" and I agree with the four principles of natural farming:
I also found it interesting to consider the ideas again with Holistic Management concepts in mind as well.  What Fukuoka-san was able to achieve on his farm and orchard in a distinctly non-brittle landscape with regular rainfall, may not be possible (or may need more intervention to get started) in our brittle environment.  For example, my attempts at hugelkultur and growing vegetables in the paddock with no irrigation have not been successful because we don't get regular rain.  That doesn't mean that the ideas are not useful, just that I need to think about how to use them and not assume that I can replicate exactly what Fukuoka-san did.
The final chapter is more philosophical - without natural people, there can be no natural farming.  "Mr Fukuoka suggested that for someone to clearly assess natural farming they first need to come in direct contact with nature as it truly is; then they can decide for themselves whether or not to follow that path".  I think I was lucky to grow up with regular contact with nature.  Not on a farm, but in a city in New Zealand, the bush was never far away, and I was often camping or tramping (bush walking) or on the beach.  I didn't really start to pay attention to seasons and climate until I started a vege garden and, only now that we have bees have I really started to notice the minor details of which trees are flowering and temperature and rainfall day by day.
Fukuoka-san also suggests a "do nothing" approach to life, by questioning assumptions such as the need to have a job or live a certain way.  Do I want to buy this thing just because its fashionable or do I really need it?  etc.  This leads to minimalism and mindfulness, simple living and self-reliance.
I have a feeling that I'm going to need to read this one again in future as I'm sure that I've missed some of the nuances, but it has helped to reinforce the concepts of natural farming.  What do you think?  Have you read either book?
See below for Amazon affiliate links.