biological farming garden soil
Another paradigm shift….
I began the first summary page (Understanding Soil Minerals for Plant Nutrition) with a paradigm shift – adding several more mineral requirements to the traditional NPK in agricultural fertilisers. This post also requires a shift in thinking, this time we need to change the idea that all microbes, bugs and germs are bad guys. Actually there are an amazing range of bacteria, fungi, protozoa and even nematodes that can help us to grow healthy, resilient and nutritious plants, and release minerals from the soil so that we don’t have to pay for them. We need to support these helpers so that our job is easier, if we try to kill any that are perceived as bad, it can disrupt the balance and start to make life difficult for us. 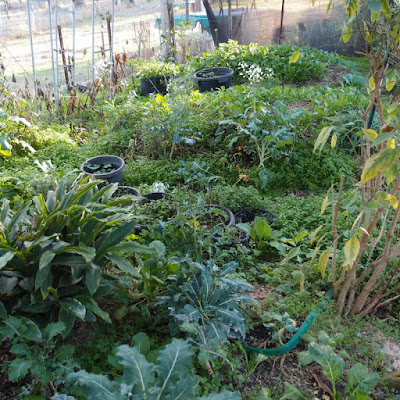 The importance of humus
Organic matter in the soil is classified as either raw organic matter, active humus (consumed in about 6 months) and stable humus. The stable humus is most important for several reasons:
The microbe connection
Microbes in the soil are the mechanism by which plants receive the minerals they need from the soil, as plants cannot produce enzymes, they rely on microbes, however plants also feed the microbes that help them. Failure to recognise the importance of microbes to plant health has resulted in increasing use of chemicals to treat plant nutritional problems (diseases), which results in plants that are both deficient in human nutrition needs and laced with toxic chemicals. The use of chemical fertilisers can prevent plants from supporting the microbes that would normally provide these minerals in the soil, and so they gradually die off. Salt fertilisers (most chemical fertilisers) test to create unpleasant conditions for microbe growth.

The role of microbes in the soil includes

I also have a summary table explaining the different life in the soil, it didn't transfer to this post, so see the full document.
Increasing microbe populations
Microbe populations have been damaged by the use of chemical fertilisers, other chemicals (herbicides, pesticides etc), cultivation, growing monocultures and poor mineral balances.

Healthy microbe populations can be encouraged by:
Microbes can also be introduced to the soil by seed inoculation and by spraying or direct injection of microbe brews (often called compost teas). Either a pure inoculum or a mixture of good microbes, such as compost, can be brewed in aerobic conditions to produce a concentrated mixture to be added to the soil, see the compost tea brewing manual. Different crops can benefit from different microbe balances, e.g. trees need more fungi, annual crops need more bacteria.  More on compost tea here and  here.

How do you encourage microbes in your soil?
More from: biological farming garden soil
Back to Eight Acres - the blog