city frugal self sufficiency simple life
Wow its good to be home on the farm!  After two and a half years of part time city-living, I was nearly getting used to it, but I was missing the country.  Each weekend I would head home early Friday afternoon and it was a massive relief to turn off the motorway and get out into farmland.

Access to alternative health services
When I first came to Brisbane I made a commitment that I would find a yoga class.  I have done pilates classes in the past, but never yoga, and I really wanted to try it.  Unfortunately in a rural area there are not usually many options, and even though a lovely yoga studio has recently opened in Kingaroy, I'd rather not drive 30 minutes to get there!  I wanted to take this opportunity to learn more about yoga.  I attended classes in West End for a while, and then over winter I didn't like getting home from there in the dark, so I tried a few different classes in the suburbs and on youtube.  Finally I was moved to a work building in the city that had yoga once a week on a vacant floor.  It did seem weird to interrupt the work day with a yoga class, but I always came back to my desk refreshed and energised.

Then I moved building again and stopped going to yoga for a few months.  I went to a Chiropractor to get some advice on my neck and back pain.  Luckily the first one I went to is really really good (Wholesome Health Chiro).  She ordered x-rays, identified the problem, gave me exercises to do and told me not to sit down so much at work.  I started doing my own yoga practice each morning, I figured if I was going to spend time and money on Chiro, I should put in some effort with a 10-15 minute yoga session each morning as soon as I get up.  If I miss it in the morning, I do it at night.  Just stretching through my hips makes a huge difference to my wellbeing.  I'm going to have to find another Chiropractor locally that takes a similar approach, otherwise I'll be popping back to Brisbane!  And I'll be able to continue the yoga myself.

Just recently I also went to a Naturopath.  I had been to a Naturopath before for help with skin and digestion issues.  I had a series of minor symptoms (mostly feeling tired) that I felt would be better addressed by a Naturopath than a doctor.  She has recommended a three-week detox, which I am going to start next week.  Although I do mainly eat real food, I have strayed a little towards convenience food and eating out in Brisbane, and I think this is a good time to reset my digestion.  I really like how Naturopaths ask so many questions and take the time to link all your symptoms (including those that you hadn't noticed).  I also had a extensive blood tests to double-check what was going on.

I am going to miss having access to the range of alternative health services, but there are a few options in the South Burnett that I will try.

Public transport and active transport
I also decided that I would use public transport and active transport as much as possible to reduce costs.  At first I was living in Windsor, which was just a bit too far from my work for walking and too much traffic for safe cycling, so I took the bus.  The bus services in Brisbane have improved 100% since I lived there 8 years ago.  There are buses every 15 min at peak time around the inner city, I'm sure its more difficult in the outer zones, but I have had virtually no need to drive anywhere during the week.

I moved to Spring Hill just over a year ago, and then I was close enough to walk to work in the city, as it was only 20 minutes and quite an enjoyable way to start the day (and freak out the locals by saying "good morning" as I passed!).  When my office building moved to Milton it was just a little too far at 45 minutes, and my Chiropractor suggested that I should only walk one way as it the heavy back pack (with my work clothes!) was hurting my back.  I started taking the train some of the way.  The trains have also improved in frequency.  I think it I lived in the city full time I would hardly use a car.

Experimenting with small-scale self-sufficiency
Its been really interesting to live in the city again, having been used to living in the country now, I was not aware of the limitations of city life until I tried it again myself.  I still tried to live to my principles.  In the first unit I had access to a worm farm, and in the second unit I set up my own mini-worm farm so I had somewhere to put scraps.  It was nice to have access to recycling (seeing as the South Burnett no longer provides recycling bins).

I missed having rainwater, and I brought bottles of water with me each week!  It would be difficult to make soap, fermented foods and grow aquaponics if you just had town water, I think a rainwater tank would be essential if I lived in the city.  I also avoided washing my hair in the hardwater as last time it dried out my hair terribly.

In the city its much easier to build community and work together.  I didn't have a chance to attend the Northey Street City Farm in Windsor, but this is the type of organisation I would join if I was living in the city full time.

Overall, I think I have a better understanding of the challenges of living sustainably in the city and I hope I can reflect that in my blog posts, which previously may have been a little focused on options for rural areas.

Library and public events
I joined Brisbane City Library in the first week I started working in Brisbane.  The best thing about the library is being able to look for books in the catalogue and request them at your local branch.  You get a message when they are available and then four weeks to read them.  Any time I see a new book that I want to read, I check the catalogue and very rarely is it missing.  Unfortunately the South Burnett has a smaller population and more limited library, so I often buy books rather than borrowing them, hence we now have two large overflowing bookcases! 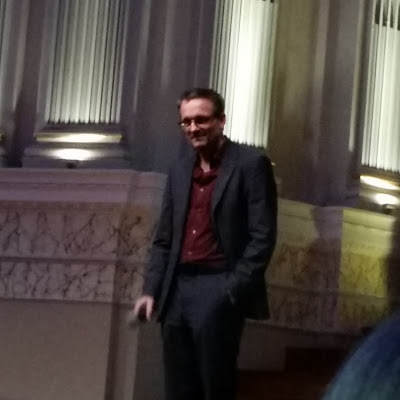 I have also had the opportunity to attend a few interesting public lectures and films.  Most recently I went to Michael Mosely speaking at the town hall about his latest book on blood sugar and diabetes.

Catching up with friends
I was surprised to find that each week I had one or two people to see for dinner or lunch.  I didn't realise I knew so many people in Brisbane.  It was really nice to see these friends and family more regularly and I hope that Pete and I will now make the effort to visit Brisbane and see these people more regularly.

Overall, its obviously great to be back home, but I am going to miss a few of the perks of city life!  What do you think?  Would you rather live in the country or the city?
More from: city frugal self sufficiency simple life
Back to Eight Acres - the blog