cattle chemicals chickens diatomaceous earth parasites
We generally try to avoid unnecessary chemicals, but one area in which we've been slow to find alternatives is with our animals. Until a few years ago, we were regularly drenching the cattle with ivermectin, dosing the dogs with flea treatments and wormers and occasionally had to dip all the chickens in malthison so get rid of lice. Since we got our milking cow, Bella, we became even more  reluctant to continue with the chemical treatments as we drink the milk everyday.

Diatomaceous Earth, consists of the micro skeletons of fossilised remains of deceased diatoms, which are a type of algae found in both sea water and fresh water. They have sharp edges, which kills both internal and external parasites, while being safe for the animals and the environment. Note that there are several grades of DE, and only FOOD GRADE should be fed to or used externally on animals.

It sounded like a great idea so I started trying to find out where I could buy it. Unfortunately most of our local produce stores hadn't heard of it. On a recent trip to Cairns, we were able to buy 1 kg of locally mined Diatomaceous Earth at the Yungaburra markets (mined in Herberton). I think our closest supply is actually Mt Sylvia Diatomite, near Gatton in the Lockyer Valley, but they will only sell it to our local produce store by the pallet (that's 50X20 kg bags, a bit more than we need!).  We eventually found a source and bought several bags on the Mt Sylvia diatomite fines product.

I use DE in the chickens' layer boxes, this helps to prevent lice and mites living in the nesting boxes. The one problem with our movable chicken tractors is that they don't have a permanent dust bath area, but they do tend to fluff up in the layer boxes, so this is the best area for our chooks to get an external dose of DE.

You can also mix DE into chicken feed at 2% by weight, as an internal wormer.  We have never had a problem with chickens getting worms, however its good to know that DE is edible, as we use it in our grain storage bins to keep out insects.  The chickens no doubt end up eating a small amount of it, but we don't bother with an intentional dose for worming.


There is not much information about DE used for cattle, I found one paper about control of internal parasites, which seemed to show that DE was as effective as chemical drenches when fed at 2% of dry feed weight as well. Again, we use DE in our grain storage bins, so the cattle get a dose now and then.  I have also read that its best to feed at full moon when the worms are more active, so if I remember I will give them an extra scoop of DE around that time of month.

There's also a bit of info about brushing DE into their coats. This is ok for the house cows, but the steers aren't so tame. We have been experimenting with neem oil and other organic options for external parasites. 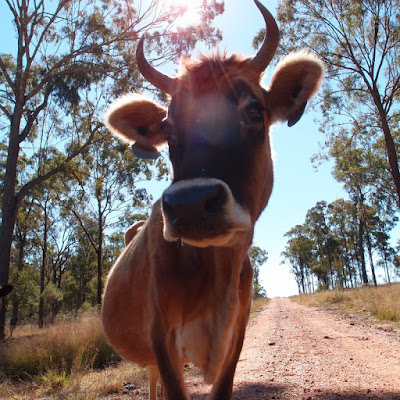 
Apparently you can feed it to the dogs at 2% dry feed and also brush it into their coats to control fleas (and dust around the spots they like to lie down in).  We have not been doing this regularly, but we have continued to give the dogs a regular tablet for paralysis ticks, which controls fleas. 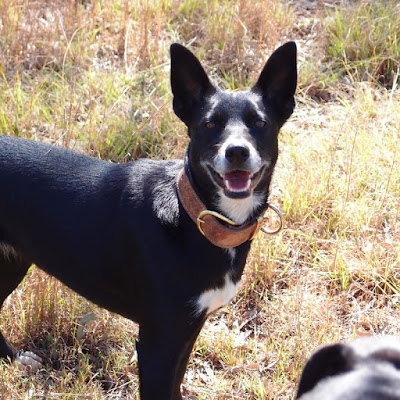 Using Diatomaceous Earth for the Garden

This website reckons you can use DE to control pests in the garden too, and I think it could be quite useful for slugs! It is non-selective though, so best to use it only when you have a particular buggy problem so you don't kill all your good bugs too.  The silica in the DE is also great of plants, helping them to grow strong cells, so its a good soil additive.


We use DE in our beehives to kill the small hive beetles, as I explained in this post.  We have a number of different traps that we load with a small amount of DE.  While the DE would also kill bees if they became coated in it, the traps are only accessible by the small hive beetle, so the DE is contained. I prefer this to using chemicals in the hive. 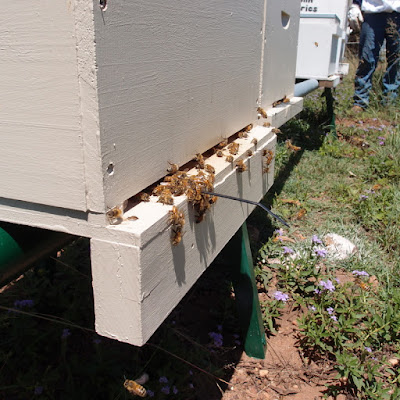 Do you use DE at your place?  Any other tips to share?