real food salt
So here’s another public health stuff up for you.  Add this to the list of things you have been avoiding for no reason, which already includes the dangers of raw milk and the evils of cholesterol.  Good news, it turns out that there’s not really any conclusive evidence that salt actually causes high blood pressure, and not getting enough salt is most likely more dangerous than too much salt.  See all the details here. 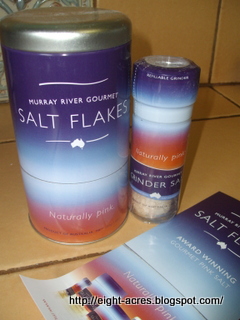 However, not all salts are the same (see this article):

This left me wondering which salt I should be using.  At different times I have used iodised table salt, non-iodised table salt, rock salt (particularly Himilayan) and sea salt (the one most recently was "evaporated naturally in ponds and stirred by hand using wooden paddles" in Spain!).  As usual, I want to eat what is best for my health, but ideally, it should also be made locally and not create any environmental problems or excessive energy usage.

According to this article, the composition of salt is important:

Unrefined salts, whether mined from the earth or harvested from the sea, contain a broad spectrum of trace elements, often in the same balance as are found in human blood. These include magnesium and potassium, necessary for health and which help the body metabolise the sodium better. Indeed, potassium and magnesium work synergistically with sodium to regulate water balance and nerve and muscle impulses.

And that really rules out the refined salt for me.  The issue of iodine is complicated though.  The iodine content of rock or sea salt is relatively low, the best sources of iodine are seafoods (including seaweed), as they concentrate the iodine from seawater.  I don't have access to fresh seafood, so I really don't eat enough sea products to get sufficient iodine in my diet.  When I had my hair tested for mineral content, I was iodine deficient   At the time I bought iodine drops to take, this is the same iodine that is added to the refined salt, but I get to control the dose.  I also bought seaweed meal (from the stockfeed store) and add that to bread and other meals to increase our iodine intake more naturally.  I'd rather be conscious of the dose I'm taking than be mass-medicated through my salt.

Back to the salt.  If the choice is between Himalayan rock salt and Spanish sea salt, I was still really confused about which salt to buy, as neither are local and I wasn't sure if rock was better than sea.  Turns out that the main difference between the two is that sea salt is more likely to contain contamination from sea pollution, whereas the rock salt, coming from old seas prior to pollution, is more likely to be clean.  So I was sold on the rock salt idea, but I wanted to find something more local... you'd think that hot dry Australia would have some kind of salt to be mined!

And that's when I found Murray River Salt.  This salt is a bit different again, its evaporated from a saline aquifer, so its old salt like the rock salt, but it doesn't have to be mined.  Even better, this is saline water that would otherwise end up in the Murray River.  I don't know how much of a difference it really makes to the salinity problem, and I still think that Peter Andrews has the right idea about how to deal with the wider issue, but in the meantime, on balance this company is surely doing more good than harm.  AND they are located in a rural area and creating jobs there, which is fantastic.

What salt do you eat?

More from: real food salt
Back to Eight Acres - the blog