dams soil
I started a series on soil testing back here, in which I explained a few simple tests to work out the clay/silt/sand content of soil and the pH.  I was always going to come back and explain dispersion, but the truth was, I didn't really know WHY dispersion was important at that time.  I have since done a course on erosion management and it all became clear.  However, dispersion is not really important for garden soil or for farming, so I never came back to finish the series.  Dispersion is very important when it comes to using soil to construct things like dams and roads, and when you start to get erosion problems.  We just had a dam built, so I came back to dispersion and soil testing, so its time to finish that series! 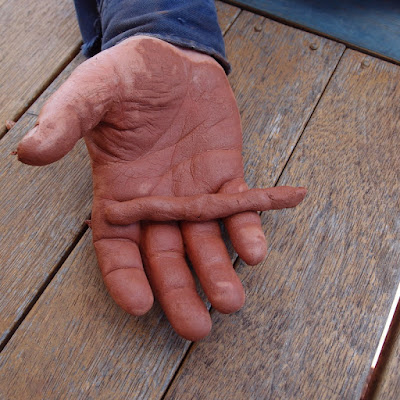 We asked our neighbour to come over with his buldozer and build us a farm dam near the house.  He thought that the soil wouldn't be any good where I wanted the dam.  So throughout the digging process we grabbed multiple samples and looked up websites and tried to figure out if the dam was going to work.
This link from the Victorian state government listed the following qualities of good soil for dam building:
Soil texture
As I wrote previously, you can roughly assess the clay and silt content of soil through what I call "the sausage test" (which is actually called the manipulative test), and the test where you shake up a sample in a jar of water and let it settle.  Both tests indicated that we had enough clay in the soil.  Using the results of our tests and the standard soil texture triangle, we estimated the soil to be a sandy loam, and therefore it met the first three requirements on the list.
Next we had to test dispersion.  This document from the NSW DPI explains dispersion and slaking.  Dispersion is a measure of how the soil behaves when exposed to water.  You test it by gently placing a chunk of soil in a dish of water (in this case the dog's water bowl, sorry Taz!) and watching the soil.  A dispersive soil will begin to spontaneously dissolve in the water, whereas a non-dispersive soil will show no signs of dissolving.  Moderate dispersion will form a dirty ring around the soil.  A slaking soil will fall apart.  A soil can be slacking and non-dispersive.  Anyway, after several tests it looked like our soil was slaking and slightly dispersive.  If it was too dispersive it would have just dissolved into the water in the dam and not sealed, no dispersive enough and the dam won't seal either. 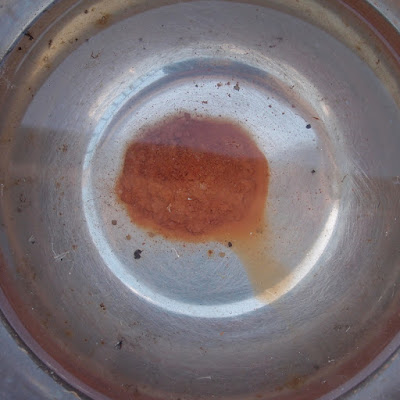 Will the dam hold water?
We told our neighbour to keep digging!  And we kept taking samples as the hole got bigger.  The thing with dams is you never really know what you're going to find as you keep expanding the hole, and there were a few different colours which our neighbour tried to mix to create a consistent layer on the dam wall. If you're planning to dig a dam, I recommend finding an experienced operator.  We won't know if we made the right decision until we see that dam full of water and holding its level.
We have previously had the same neighbour work on our driveway and went through the same soil testing.  For a road, you want less clay and silt, more gravel and sand, and non-dispersive soil to prevent erosion.  The key to erosion control is a good layer of top-soil or non-dispersive soil anywhere that will be exposed to water, as dispersive soil will literally dissolve.
None of this is very scientific, but it does give you a rough idea of what type of soil you're working with and what you might be able to us it for.  And its kind of a fun opportunity to get your hands dirty!  If you want to know more about your garden soil, see what I wrote here.
What do you think?  Have you used soil testing to estimate soil texture?  Have you built any dams or roads lately?
More from: dams soil
Back to Eight Acres - the blog