garden herbs
Its winter and coriander (Coriandrum sativum) is coming up in my garden.  Outside of the sub-tropics, coriander is a spring/summer annual, but it quickly bolts in hot weather, so it grows better here in winter.  This herbs is known by its Spanish name, cilantro, in the US (and obviously in countries that speak Spanish).  Coriander is an ancient herb and spice, that is used in cuisines as varied as Indian, Chinese, Mexican, Egyptian and Mediterranean. 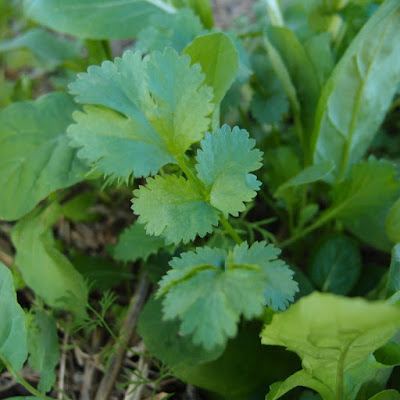 How I grow coriander
You can get coriander as seedlings, but I usually plant it from seed.  When it goes to seed in my garden, I scatter the seeds and they come up the next year.  I also throw a few extra saved seeds around the garden in early in winter, to make sure I get plenty of coriander.  It does grow better here in the colder months, and quickly bolts to seed when the weather warms up or if the soil dries out.  The flowers are popular with bees and other pollinators, also resulting in plenty of seeds for next year's crop and for use as a spice.


How I use coriander
Both the leaves and seeds of coriander can be eaten (also the roots apparently, but I haven't tried them).

- the leaves are good for digestion, and add a fresh taste to spicy dishes, best added as a garnish.

- the seeds chewed whole are good for breath freshener, but are also added ground, as part of a spice mix to many different dishes.

In particular, I use ground coriander seed in my spicy Mexican mince recipe.

As I only have coriander for a short period when its cool enough to grow here, I always look forward to it and treasure it while its fresh.  I haven't found a good way to preserve the leaves so far.


Do you grow coriander?  How do you use it?  Do you call it cilantro?