Arrowroot (Canna edulis) is a plant that you may not immediately think of as a herb, but I use the definition from Isabel Shippard's wonderful book "How can I use herbs in my daily life?", she says a herb is "any plant that is used by man for food, flavouring, medicine, aroma, dye or any other use".  And of course arrowroot features in the book too, so its one of Isabel's herbs.

Arrowroot is also known as Queensland arrowroot, not because its native to Australia but because there was once a thriving industry here producing arrowroot flour from the plant.  Not to be confused with the South American Arrowroot (Maranta arundinacea), which can also be cultivated for flour, but I haven't seen or heard of it growing here.

How to grow arrowroot
Arrowroot is propagated by division of the rhizome.  I was given a small piece of root and leaf and I thought it had died, but it managed to grow and multiply very quickly, now it takes up a corner of my garden.  Its easy to split up and establish in new areas.  It doesn't need watering, even in our dry hot summers.  It has a red flower, looking like a typical canna, and producing small round black seeds, which also grow.  I sometimes have to remove it when it appears in the wrong place.  In winter it dies back when we have frost, but it regrows as soon as the weather warms up again. 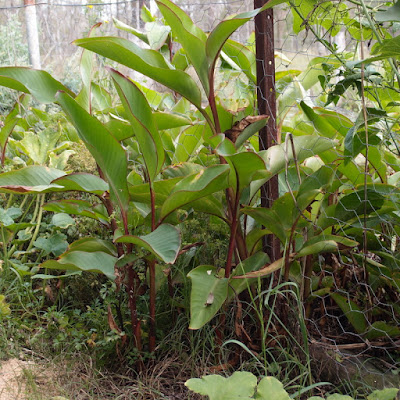 How to use arrowroot
All parts of the arrowroot plant are edible and high in protein.  I originally wanted the plant to feed to the chickens as an alternative to grain.  Of course they weren't interested and I thought the experiment was a failure.  But at certain times of the year, the arrowroot becomes desirable to the chickens and the cows and I actually have to fence it off or they will eat it to the ground.  I occasionally cut a leaf to give to the animals and they will usually ignore it, I think its best planted where they can help themselves when they want it, although you may need to give it a rest to grow back.
I have tried eating the arrowroot and making flour, but it is not really worth the effort (unless there was nothing else to eat).  The yield of flour is very low, and there is a lot of work involved with preparing and washing it, I couldn't get it to separate properly and ended up with brown mush.  I think the flour could be useful if it was easier to obtain!  The root is recommended for digestive upsets, and it doesn't really taste like anything.  The leaves could be useful as disposable plates.
The plant grows so quickly in our climate, its also very good as a mulch plant, as you can regularly cut it back and count on it growing back again.  It is considered a weed in some parts of the world, so be careful if you don't have a decent frost to slow it down, you might be overwhelmed with arrowroot!  Arrowroot is often used in permaculture because it is so versatile.
I also think the flowers are quite pretty and and it makes a nice hedge plant or windbreak.
Do you grow arrowroot?  How do you use it?
Share Tweet +1