update
It has been a beautifully cool and rainy start to spring.  This is a bit different to the last few years and we are not complaining!  the grass is still green and my garden, while full of chickweed, is producing lots of silverbeet instead of drying up and dying. 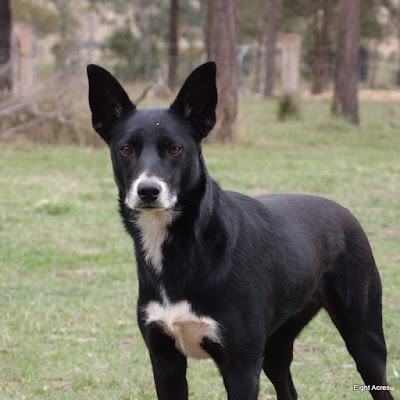 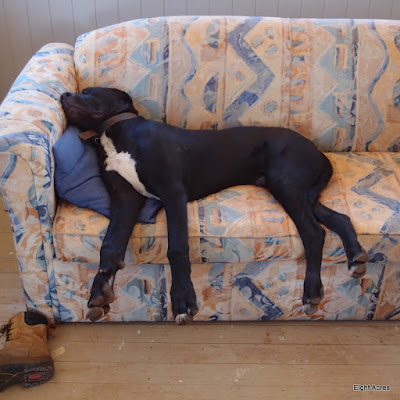 Food and cooking
Every weekend I cook something in bulk, either a roast or a casserole or curry in the slow cooker, and then I make up 10 lunches in our glass lunch containers, with lots of veges.  That ensures that we have a healthy and frugal lunch to eat every day at work.  For dinner I often cook a larger batch so that we can eat the same thing for two nights and have less washing up and cooking work to do the second night.  Lately Pete has been studying, so I've been doing all the cooking, but usually we take turns.


Land and farming
We haven't had any time to do much on the farm.  We really need to mow the perennial pasture at some stage, the tops are dry and it will grow back green if we slash it down now.


Chickens
The hens are laying steadily now and we have plenty of eggs.  Enough for the dogs to have several each day and we still have to make the occasional quiche!

Cows and cattle
Not much new to report here.  We still have the nine angus cows and eight calves at Cheslyn Rise with Bella, Molly, Nancy, Ruby and Fatty (and Bully).  And at Eight Acres we have the two baby house cows (Ruby and Charlotte) and Chubby.  The rain is helping with our grass supplies.  We need to castrate the bull calves soon.

Bees and Beekeeping
We have had mixed success with the nucs we made last month.  One of them swarmed, which Pete managed to catch (a beekeeper told us to put a frame of brood in the box to make the swarm stay put, and this time that seems to have worked).  It looks like one of the nucs ended up with the original queen and then the newly hatched queen swarmed (or the other way around), so we have a swarm with queen and nuc with queen.  The other boxes don't have a queen yet, but we have given them more brood frames from the good boxes and will see if they come right.  They seem to be finding lots of nectar and are doing a great job building honeycomb, so if nothing else we will end up with plenty of good frames for our next attempt at starting nucs.

Garden
My garden is now full of flowers thanks to a nice we spring.  I have geranium, brassicas of all description, calendula, marigolds and rocket flowering.  A pumpkin vine has appeared from the compost and is making an early start, as are several tomato plants.  I'm still harvesting peas, kale, silverbeet and chard, perennial leaks, celery, swedes and a few carrots.  The capsicum plants have survived winter and the bees have already pollinated a few flowers for me.  I've noticed a new choko vine has popped up and I need to weed out the blackberry that wants to take over (and has only ever yielded a couple of berries!).  I have planted bean seeds, and the mice haven't eaten them.

House
We have made some major progress with the house.  We have started moving things from the the house into the shed and we have finished painting the lounge, bedroom and kitchen.  We took all the doors off and trimmed them to make sure they shut when the new floor is installed, then we started painting the doors, door frames and window frames.  I have booked in the floor people to come and assess the job (we have already paid a deposit, but I put them off until we had got further with painting) AND the kitchen guy is coming to give me a quote!


Permaculture
I hope by now that anyone interested in Permaculture will have heard that Bill Mollison passed away on the 24th of September.  Bill Mollison developed Permaculture with David Holmgren, and Bill has written many books and really worked hard to spread the word.  There have been many wonderful tributes across the net, so I don't have much to add, and I will continue writing and practicing permaculture.  I think we can all continue Bill's work in our own small ways, so change the mainstream commercial culture.

This month I'm up to the principle: Make the least change for the greatest possible effect.  This principle has two parts I think.  Looking for small changes that you can make in your life and on your property, changes that don't require a lot of effort or resources are the easiest to achieve.  But also targeting changes that will result in the greatest effect, so that we are prioritising effort and not starting too many projects at once.  Related principles from Holmgren's series are 1) observe and interact (so that you can see what changes to make), 9) use small and slow solutions (low effort, but maximum impact) and 3) obtain a yield (make sure you see a result from your actions).

A couple of examples that come to mind: firstly the local produce share that I've helped to start with some friends.  Its really low effort, just once a month for an hour we get together to share our excess produce.  I spent some time researching the safe food rules and my friend researched potential locations and then we launched the idea on facebook.  For that small effort, we now have a growing and connected community group who always go home with some useful produce, this seems like a small change with a big effect.

On our property we are always looking for ways to make changes while keeping input costs low.  In my garden I have found that I don't need to dig the ground now that I have enough earthworms to keep the soil aerated.  On a larger scale, we can reduce the need to plough by growing perennial pastures and encouraging worms and microbes to work the soil for us.  This has huge benefits of increasing soil carbon and plant health, increasing carrying capacity and biodiversity, reducing erosion, leaching and run-off.  Sometimes the low-effort/high-impact solution is right in front of us, but its so different from conventional methods it takes imagination and guts to make the change and follow through. Create
I don't seem to have had time to create anything this month.  In fact I have been spending any spare time decluttering and collecting things to be moved to our new shed.  We have jammed so much "useful" stuff into our little house, and now I finally have somewhere to put it.  I am sorting through it and gifting or chucking anything that is not truly useful.  I do not want to move anything that we don't really need.  This is a slow process, but the clutter in our house is reducing and its a nice feeling.  I can actually close the doors to the linen cupboard!  We plan to start putting furniture in our second-hand house when the floors are finished, but we will only move a few things at a time.  Rather than fill the house, we will move things in as we need them and see how we feel about it.  I'm also planning lots of cupboards!

How was your September?  What are you up to for October?