update
The dogs are still sleeping outside on the veranda.  I think they are getting used to it.  Unfortunately if they don't sleep well, neither do we, as they are right outside our window.  I go out and put their coats on most evenings and I often find them like this: the little dog on the big bed and the big dog on the little bed.  I have to rearrange their blankets and put the right dog on the right bed.  The second photos shows the dogs in the correct position with their jim jams on...

So with winter solstice on 21st June, its now officially winter and its bittersweet to know that evenings are getting longer but summer will be back before we know it!  We have been pleasantly surprised to find that our property up on the hill is up to 5degC warmer than the valley most mornings, so we might get away without a frost up here (overnight temperatures have been 8degC, so the dogs are fine, but they would LIKE to be inside).  We have had the fire going most nights and its perfect for warming up the lounge and our bedroom.  We have had a few sprinkles of rain, just enough to keep the dust down and the grass more green than brown. 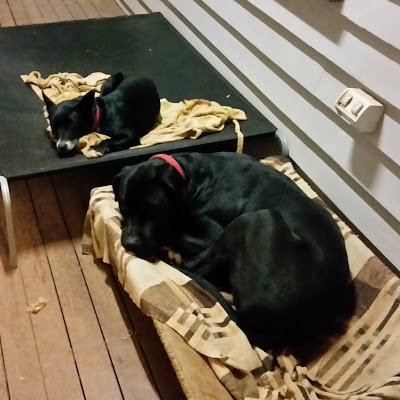 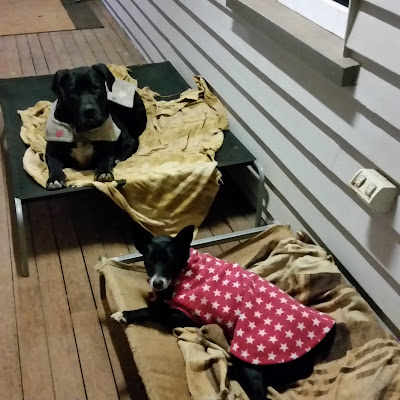 Food and cooking
We have the butcher booked for the 28th July, so I have been working on sausage recipes.  When we first started home butchering, we used the butcher's sausage mix, but we didn't always like the sausages and you end up with 30kg of sausages, so you want to make sausages that you like!  A few years ago I bought an organic sausage mix, which we did really enjoy, however I've been unable to get that mix again, so I started looking at making our own recipe.  All I needed was herbs and spices from the supermarket, so it was easier than I expected.  I made 2.5kg of meatballs with five different recipes so that we could decide what we wanted to make in bulk and they were all yummy, so I think we'll make a few different ones.  I'll share my recipes in a post later this month. 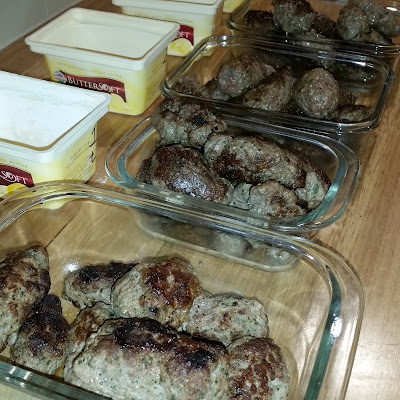 Land and farming
Our hay shed snake is back.  Its a python, so its not dangerous to humans, but it eats the mice, so we are happy to have it in the shed. 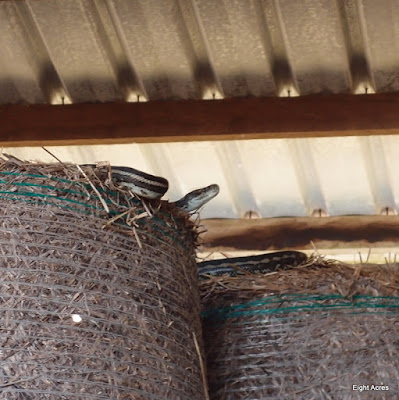 Chickens
We have eggs again!  Our old hens started laying first, but now they are all laying again, so we are very happy to have an egg surplus (the dogs are happy too) and we will hatch some more in Spring. 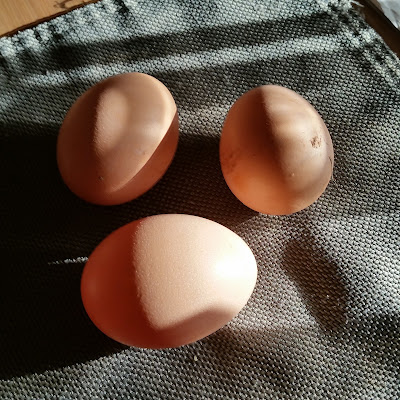 Cows and cattle
We will sell our steers and weaner calves at the first opportunity now that its a new financial year.  We have far too many cattle on our property at the moment, but we needed to hold them into July.  We just put a band on this little fella, so he was not impressed, but so fluffy!  So far we have only had two new calves this season, so we probably need a new bull... we will deal with that later. 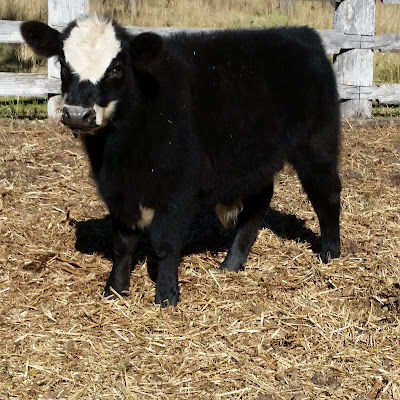 Garden
My pot garden is going well as long as I remember to water everything.  The kale is starting to get aphids though.  I've been picking a few peas and strawberries.  And its nice to have fresh herbs.  Its not a huge harvest, but its better than nothing.  We need to get some shade organised before summer though.  We moved our aquaponics kit (not set up yet) from Eight Acres up to Cheslyn Rise and its on the list of things to set up!  We are pretty excited to see it running, but need to get some other jobs done first. 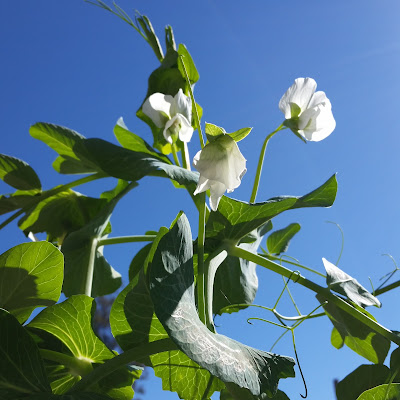 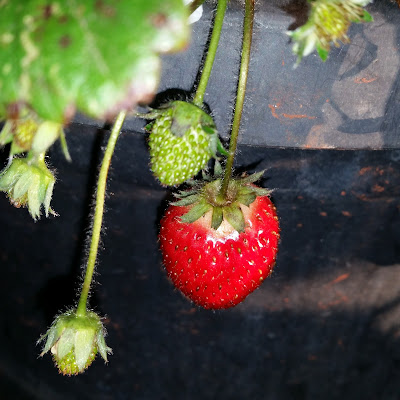 House
We finally got around to putting up the paintings that have been in storage since we last moved 8 years ago.  Here's a photo of our lounge room with out new chairs (we also got some beanbags for when we are not clean enough to sit in the new chairs!).  The rug is not one of our hides, we bought it and its lovely.  The curtains are too long in this photo, I had to cut 16cm off them, which I then made into draught snakes for our doors.  I'll write a post later about keeping the house warm in winter.

We also painted the outside of the kitchen room in the shed.  Its just fiber cement sheeting, so it needed a coat of paint to protect it.  We're also going to paint more of the floor.  The paint was cheap miss-tinted paint from the hardware.  When I opened the lid it was the HOT PINK colour in the photo below and I was a bit worried that Pete wouldn't want this colour for his workshop.  I kept stirring and fortunately the colour changed to a nice plain grey.  When we get that finished we'll be able to finish setting up the shed. 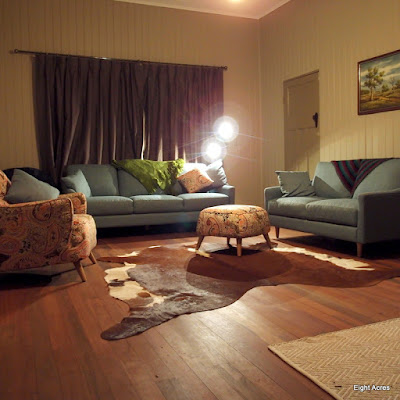 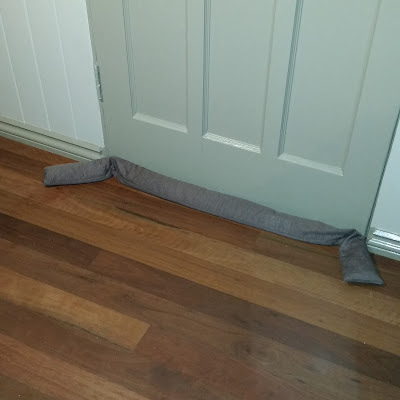 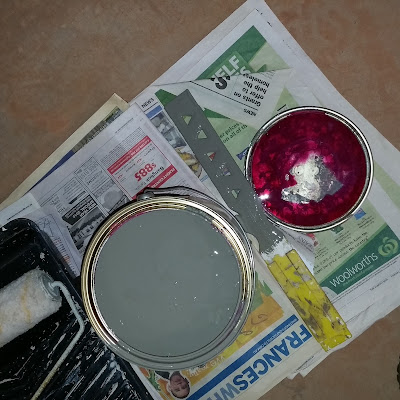 (affiliate link) is about living creatures in the garden.  He already discussed microbes in the soil, so this is about things that live above the ground.  Everything from using chickens (in chicken tractors of course) to attracting beneficial insects.  This is often a problem for organic gardeners who have transitioned from regular chemical gardening.  If you are used to paradigm of spraying all insects and then you want to stop using chemicals, you look for an alternative way to kill the insects.  Toby suggests instead, it would be better to look for a way to create an ecosystem to manage the insects.  The thing to remember is that the vast majority of insects in your garden are either beneficial or benign, so you don't want to keep them all out, and the easiest way to get rid of the pest insects is to encourage their predators.  Many are nectar-feeding, so you can also attract pollinators by planting flowers.  I also encourage people to keep their gardens open to birds and lizards etc, that will also eat insects.  If I have a serious insect problem, the only thing I use is neem oil, as it affects the chewing insects that eat leaves, without harming pollinators.  But in general, I sacrifice a few plants in order to build the overall ecosystem of the garden.  I am noticing the difference now that I'm gardening in pots and the aphids have found my kale, I definitely do not have an ecosystem there yet!

Create
I finished my second pair of crochet socks with scraps of wool, and they are so warm and comfy because you can make them to fit perfectly.  They are great for bed socks.  And I've been making winter lip balm, leather dressing balm, wooden chopping board polish and finally some goat milk soap!  I'll share the soap recipe very soon too. 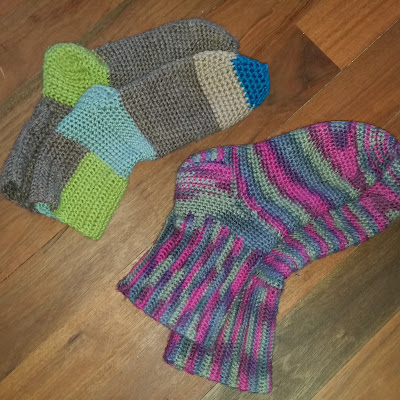 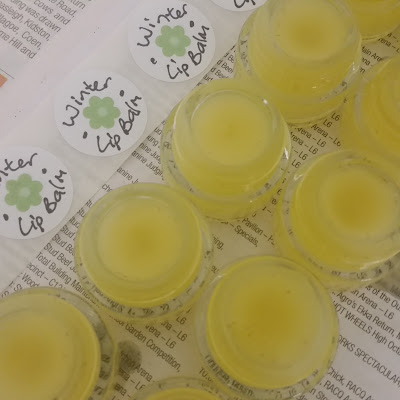 How was your June?  What are your plans for July?