update
January felt like a very short month!  And I managed to have the Australia Day LONG weekend (including the Monday) at home.  Once again we had a bit of rain.  90 mm this past weekend at Kumbia and 30 mm at Nanango.  The new dam is nearly full so we just wait to see if it holds water now.  The forecast was for below average rainfall this year, so we are thankful for every drop we get. 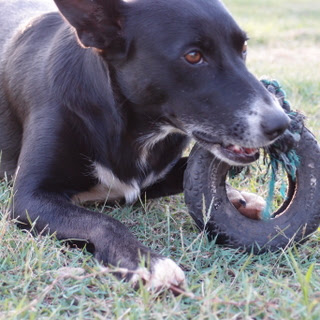 I got some jars for our honey and started selling 500g and 1kg at work.  Its very popular!  Now the bees just need to keep up production! 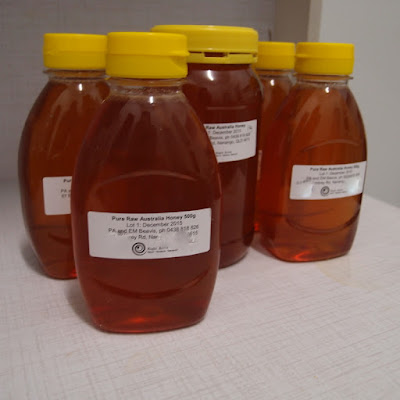 Land and farming
Speaking of bees... they seem to have taken up much of our weekends recently!  There has been so much going on I don't even know if I can remember it all, but I do write in our Bee Book every time we open a hive so we don't forget what we saw.  When we open a hive we are looking to see how much brood and honey is in the hive, hoping to see the queen, but if we at least see eggs we know she is in there somewhere, and then we decide if we need to add another super box to give them more space.  Over Christmas we took some brood out of our bigger hive to start a new hive and we ordered a new queen, but we were a bit late putting her in the hive and they had already started making their own queen, so the new queen swarmed.  Pete saw the swarm and managed to catch them in another hive but when we looked in a few days later we found that the queen was damaged (she may have come like that or got hurt during the swarming, but her back leg wasn't working).  We ordered another queen, she came in a little queen cage with 4-5 escort worker bees to feed her until we put her into the new hive.  The end of the cage is plugged with sugar candy that the bees eat to release her.  That hive now appears to have accepted her and the original nucleus hive has a new queen that they made.  We are learning FAST! 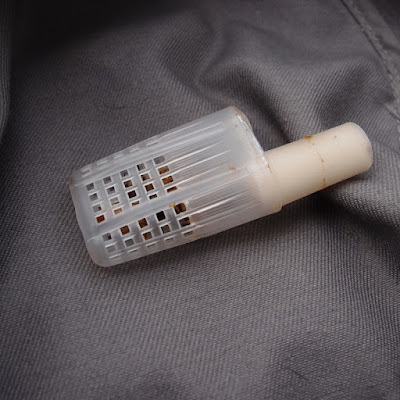 Chickens
We put the little chicks out in a chicken tractor already.  They were only two weeks old, which is way earlier than normal for us, but as the weather was in the 30s (degC)  and they were stinking up the brooder box something terrible.  They are fine in the chicken tractor with a heat lamp and we cover the tractor with blankets at night.  They have more feathers now and they LOVE the grass.  Happy little chickies.  Meanwhile last count we had five broody hens and nowhere to put them as all the chicken tractors are full, so they are just taking up nesting box space and upsetting everyone.  I think I will try putting ice under them next weekend.... 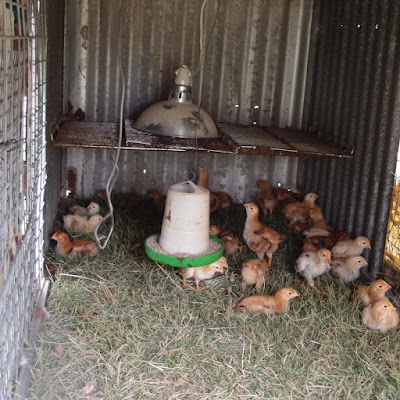 Cows and cattle
We have plenty of grass again, so the cattle are happy too.  We were worried that the angus steers really weren't losing their fluffy winter coats and were looking quite shaggy.  Traditional farmer wisdom said we needed to worm them.  Well I wanted to sell them and not spend $500 on worming chemical, so instead we started feeding a mixture of minerals, copra, diatomaceous earth and a small amount of copper sulphate.  Diatomeceous earth is supposed to help with worming, and according to Pat Coleby's books, animals with worms are copper deficient.  One way or another this seems to have worked and the steers are starting to look sleek and shiny.

The dairy cows are also enjoying the fresh grass.  Little Rosey (house cow in training) had three day sickness (we think), although it seemed to be a very mild case and cleared up quickly, either that or some other kind of bovine flu.  We were just happy to see her well again. 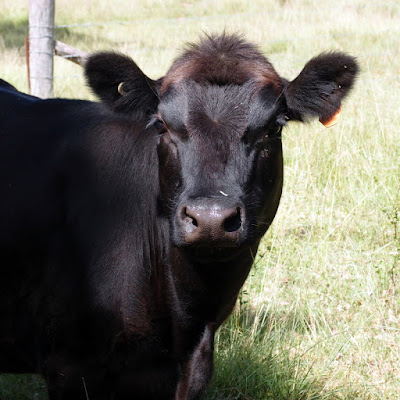 Garden
Well with all this rain and humidity the jungle continues to grow!  The pumpkin vine is starting to take over, but I don't see any fruit.  The self-seeded tomatoes are starting to produce, you never know what you're going to find and they have sprouted from the compost.  The bugs are also doing well and I got a bit worried by the audible buzz in my garden, so I sprayed neem oil on all the leaves that were being chewed as I didn't want to lose my eggplants.  The bush beans were chewed and mildewed to death, so I've pulled them out and made room for whatever pops up next, as there are plenty of climbing beans to pick.  I'm still waiting for chokos and rosellas.  The pepino bushes are growing like mad, I had to cut them back a bit to keep a path through the garden, they make good compost and I throw the fruit to the chickens.  I got a couple of new herbs - feverfew (pretty flowers below) and bee balm/monarda. And the chillies have started to ripen, so many chillies! 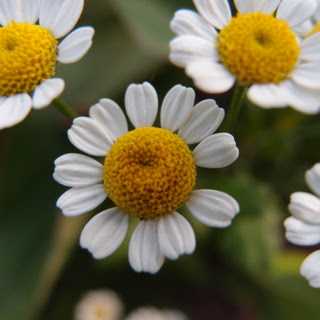 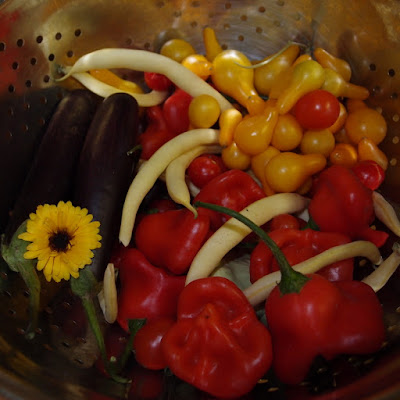 House
We decided a while ago that the window in the old pantry had to go.  We want to put the stove in there and I don't want to have to clean grease off a window.  The glass was cracked so we would have had to replace it.  Also it faces west, so the window was letting in a lot of heat.  We did some demo work and removed the window and replaced it with weatherboard.  Its looking very neat.  Now we are ready to sheet in the pantry.  We are SO close to painting the kitchen and side room, we really underestimated the amount of bogging and spackling that would be needed to prepare these rooms.  The most exciting news is that shed construction has started AND we are not doing the work!!  It looks like the contractors are doing a great job, so I'm looking forward to seeing the finished shed. 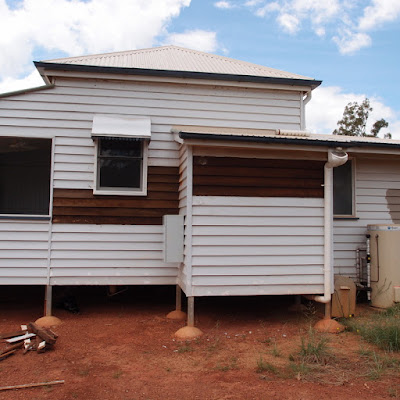 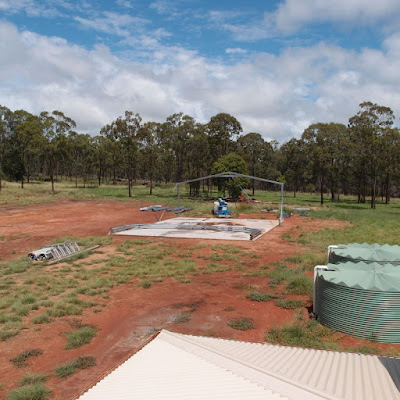 Permaculture - Integrate rather than segregate
Here's what I wrote last time I reviewed this principle.  The key points are:

I will use water on our farm as an example.  Specifically our new house yard dam is an element that has the following functions:

If we take the last function, this is also provided by other elements in our systems, including our solar bore, multiple rainwater tanks connected to house and shed and greywater collection.
I could repeat this analysis for every element and function to create an interconnected system.  When adding a new element we always think "what else could this thing do for us?" and design accordingly. 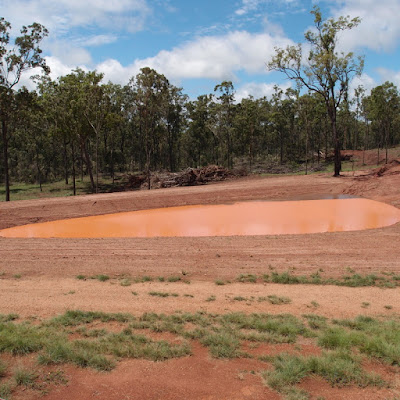 Support me
My latest soap tool is a "soap stamp" which we use on the soap just after cutting the bars when its still a little soft.  I love the spiral pattern.  I got a new cutting guide as well, Pete thought some of my bars were getting a little stingy, so we are cutting standard sizes now!  Stamps and cutting guides are available from Aussie Soap Supplies. 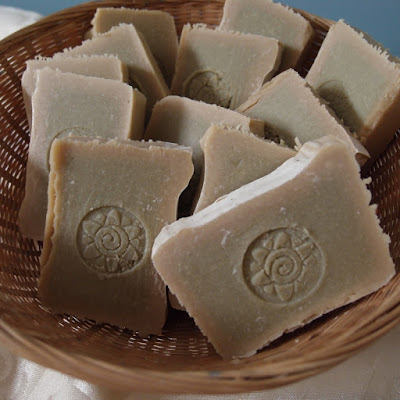 A few new blog this month:

My Empire of Dirt Garden

How was your January?  What are your plans for February?
More from: update
Back to Eight Acres - the blog