Braford cattle Cheslyn Rise
It may seem strange that we bought our herd of Braford cows without knowing much about the breed, but when we decided that we wanted to buy cows, it was more important to us to find a herd of a consistent breed in the local area on a (cattle) tick-free property, than worry about specific breeds.  If we had done all the research at the start and had our heart set on a breed, chances are we would never have found a herd of cows in that particular breed.  When we started looking at the Brafords, we found out a little about the breed and they seemed to be suitable for our property, so we went ahead and bought them.
By coincidence, an acquaintance of ours happened to own a book called “The Australian Braford”, which was published by the Australian Braford Society to commemorate the Silver Jubilee of the breed in 1987.  The book details all the early stud breeders and, more importantly, the origins of the breed itself.  I found it absolutely fascinating to find out the origins of the breed and the historical context.
Around the 1820s the first British cattle breeds were imported to from (until then the only cattle available were a mixed herd descending from those cattle on the first fleet).  At this time Herefords and Shorthorns were particularly popular.  Such was the influence of “the old country” that the cattlemen persevered with these breeds, even though they were not particularly well suited to the Australian climate and vegetation.  They even judged the show cattle to British standards.  At the time, the Bos Indicus cattle, originating in , were thought to have unsuitable temperament and not put on enough weight to be used as commercial beef breeds.  It seems hard to imagine now that we are so used to seeing Brahman and the Brahman-derived breeds, such as Droughtmasters, on properties across Northern Australian.  To me this shows how conservative farming practices were back then, with little innovation, possibly due to the potential cost of failure and lack of information available to farmers.
It was not until introduced ticks (Cattle Tick from ) and drought became a major problem in sub-tropical in the 1940s that cattle producers began to consider the advantages of Bos Indicus breeds, particularly the Brahman.  Bos Indicus cattle are known to have higher tolerance to heat and resistance to parasites.  They are able to forage on poorer pasture and survive in more difficult conditions.  It is interesting timing, as in other areas of Australian culture, the country was just starting to establish some independence from the .  http://home.alphalink.com.au/~eureka/cult.htm
I was absolutely fascinated to read about the first Braford breeding program conducted by Adam Rea of Eden Garry, and the dedication and patience required to develop a breed that would prosper under the conditions at his property.

“In July 1946 I went to Glenparirieand bought a pure grey Brahman bull out of some of the 1933 importation.  This bull was put over 4 Eden Garry [] breeders.  This bull produced 100 brindle calves, but they all had white faces.  Ten half-bred Brahman bulls were put over more of the cows.  In February 1948, the half-bred Brahman heifers were put with a bull to get one-quarter Brahman, and some of the half-bred Brahman heifers were put back to the pure Brahman bull to test his breeding strength.  The tops were very good, but temperament was bad.  I kept a few of these three-quarter bulls to put to cows to give three-eighths progeny.  The half-bred Brahman bull went to one-quarter Brahman heifers and the cows.  The calves were numbers to know the three-eighths and one-quarter, so they could be put into their right groups.  At this stage, I had no concern for colour; conformation and fertility were the aim.  All this crossing went on until the herd carried three-eighths Brahman blood.  I formed the three crosses to give a wide range of type and conformation.  From there on, I started to close the gap and gradually a more uniform type emerged.”

This made me think that he probably kept better records than my occasional garden journal entries!  The book goes on to explain how Mr Rea eventually started to select for colouring to develop the red and white Braford that we know today.  The society wasn’t formed until 1962, which is testament to the amount of work required to develop the Braford breed.
The unique aspect of the Braford (and some other Australian breeds, like the Murray Grey), is that they were developed to suit their environment and the breed has always been allowed to be three-eighths to five eighths Brahman, depending on the environment in which they live, rather than having a uniform look, as many of the British and European breeds require.  This is very important in the diverse climate of , where no one breed will do well in every area.
As for their appearance, Brafords are (obviously) a bit of Brahman and a bit of .  Like the Brahman, the Braford has a distinct hump over the top of the shoulder and neck (although usually not so large in the Braford), and a loose flap of skin (dewlap) hanging from the neck and under their bellies, they also have distinctive long, floppy ears.  From the breed, the Brafords derive their red and white colouring.  They usually have a red body, with a white face.  Breeders aim for red pigmentation around the eyes to reduce eye cancer.  The Braford does not have the thick coat, even in winter they maintain a short coat like the Brahman.  While cattle can be bred to be consistently polled (no horns) the combination of Brahman and genes has complicated the establishment of consistently polled Braford cattle.  The standard in is to remove horns if the animal is not born polled.  This is for aesthetics, safety and to prevent bruising the meat (I’ll discuss dehorning in more detail in a later post).
After the Brafords became established in the warmer climate of , there was some interest in the breed further south in New South Wales as well.  In this case, the farmers were more interested in the natural resistance to eye cancer, rather than the heat and tick tolerance that had proved important in QLD.  They don’t seem to have gained any popularity in the more southern states however, I assume this is because the British and European breeds do well in those climates.
Even more interesting is the concurrent development of the Braford breed in  in the late 1940s.  In this case the Brahman cattle were more available and the breed was developed from Brahman cows and a Hereford Bull in , where the British breeds were also suffering under hot conditions.  In both cases, the Braford genetics were created out of necessity and with the aim of developing a breed that would thrive in a warm climate. 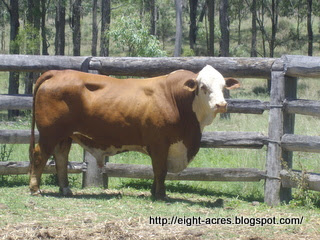 And finally, my favourite part of the book was a bush poem about the Braford:
The neighbour’s bull, by Gordon MacKenzie of Strathconan
My neighbour is a careful bloke,
But still nobody’s full,
And often I would say to him:
“Bill! Try a Braford bull”.
Any always his reply would be
“Don’t take me for a sucker”.
The stock I’ve got are quite alright
They only need more tucker
One day I missed a Braford bull,
I’d put him out to work
And when my neighbour brought him back
He told me with a smirk:
“I’ve had him there for quite a while,
My bulls are poor as hell,
And though he’s done a lot of work,
Your bull looks pretty well”.
But then the drought got worse and worse
I was worried, I’ll confess,
My Brafords battle through OK
But Bill’s were in a mess.
And when the drought was over
He came to me and said:
“I’d like to buy some Braford bulls
For most of mine are dead”.
“Those Braford weaners by your bull
Are proof for all to see
I’ve nought to lose, and much to gain,
It’s Brafords now for me”.
So when you Braford bull gets out
Don’t rave and get all tense;
The best promotion guy we’ve got
Is the bull who jumped the fence. 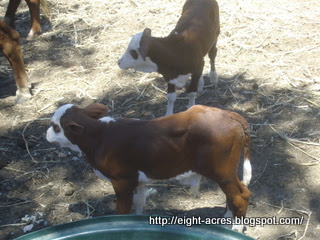 More from: Braford cattle Cheslyn Rise
Back to Eight Acres - the blog