Have you heard of a soap saver?

I hadn't until recently. A friend mentioned to me that she was putting the small bits of soap in a sock and that I should think about crocheting a little bag instead. And then they keep popping up on social media, so I thought I would give it a go.

Am I the only one who hoards the little end bit of soaps that are too small to use? I have a bit of a collection of them.  So I whipped up a little soap saver sack and filled it up with a few odd soap ends and I'm very pleased with the results. If you can do basic crochet, they are very easy to make, but you can also knit or sew a simple soap saver (or last resort - use an old sock!). 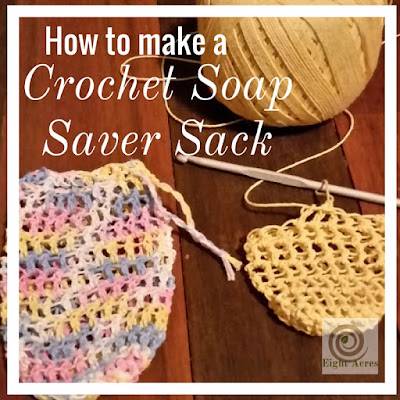 I used cotton yarn from the local market.  You could use any yarn.  I liked cotton as it can be composted (wool, hemp, bamboo or sisal would also be compostable).

Chain 6, turn
Chain 1 and single crochet back along the chain
Don't turn, but keep going around into the back of the chain to form an oval shape
Double crochet around to start forming a bag - I don't bother with linking each row, I just keep going around in a spiral because its easier
Keep going until the bag is tall enough, then do a row of single crochet
To make the bag smaller at the top - the final row was a decrease on every second crochet, but this is optional
To make the tie, just cut three pieces, plait them and thread through the second row from the top (you could also use a ribbon). 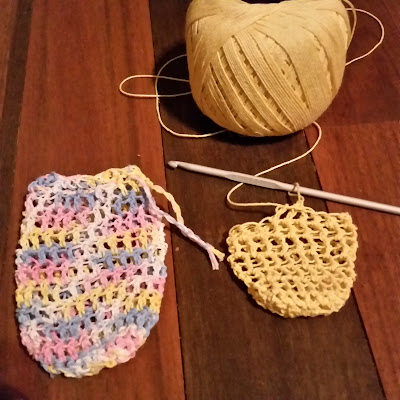 The simplest would be to crochet or knit a square (or cut out a square of fabric), fold in half and sew up two sides to make a bag, then use plaited yarn or a ribbon to tie the end.  You could also knit using double pointed needles and then finish off the end like a sock end (see my sock instructions here).  The soap saver can be as pretty or as functional as you want, so its a great beginner project.
Have you made a soap saver?  Do you have the ends of soap?  I can't throw them out, I know how much effort went into making them!

If you don't want to make one, I now have soap savers in stock. I didn't make these (they are much neater than anything I can make!) and the yarn is sisal, so they are a nice scrubber as well as making your soap scraps go further.

More from: crochet knitting soap
Back to Eight Acres - the blog