When we found Bella’s dead calf we didn’t have much time to figure out what to do next.  We managed to milk Bella by carrying her calf to the milking bales, and then we started calling friends to find out if someone had a spare calf that we could try to foster.  That afternoon we picked up little Romeo, and he spent the night in a separate yard, and Bella stayed close to her dead calf.

We have never fostered a calf before, so we weren’t sure how it was going to work.  We were very lucky that we could find a very tame little bull calf, who was only a week old and had been bottled raised since birth, as his mother had died.  He was the ideal foster calf, very tame, so he wasn’t scared of us, and very strong and used to sucking from a bottle, so not scared to find his milk in strange places!
Various people and forums suggested different ways to get a cow to take a foster calf.  Everything from dosing the calf in the afterbirth, the cow’s urine, bananas, to skinning the calf and putting the skin onto the new calf.  We only tried the urine suggestion, as Bella had already eaten the afterbirth and I wasn’t keen on skinning the dead calf.  I was considering pouring molasses on him, but didn’t get around to it.
The first morning after the calf died, we got Bella into her miking bales, and sneaked the new calf up behind her to suck on her teats.  He was very enthusiastic, but Bella was not impressed.  That afternoon she had to be coaxed into the bales and I had to take Romeo away so she couldn't see him, as she didn't trust us.  We decided that milking routine was the priority and the fostering could wait.  Last year we had trouble with Bella getting mastitis when she refused to be milked, and we really didn’t want that to happen again, so we bottle fed the calf instead. 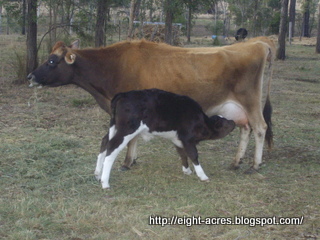 We took the dead calf away from Bella on the first morning, so she was just in the paddock with the new calf.  At first she was a bit mean to him, head butting him out of the way.  I understood her frustration, she wanted HER calf, not this imposter!  But he knew where the milk came from, and probably wanted the company, so he kept following her.  Over the coming days we saw the two of them spending more time together, and Bella slept near Romeo at night.
Exactly one week after Bella's calf died, we milked Bella and only got 4L instead of 8L.  Romeo didn’t come to the gate to get his milk, he was happy lying down.  I gave him 2L anyway, greedy little thing, he drank that too.  After breakfast we saw Bella licking the calf, which was very exciting, because it showed that she was starting to accept him......and then we saw him having a drink from Bella.
It is very funny to see a little fresian-cross calf drinking from a jersey cow, and for the cow to be so protective of him.  She really has decided to adopt him, we are not allowed too close to him and she is constantly licking him clean.

As this is our one and only experience of fostering, I won't claim to be an expert, but I can give some advice on what I think worked for us:
Have you ever got a cow to take a foster calf?  Any tips?
Share Tweet +1