You’ll probably be surprised to know that it was Pete who really wanted to get a cow, and at first I didn’t think it was such a good idea. I thought it seemed so expensive, I thought we didn’t have enough land and I didn’t know what we would do with all the milk. Eventually we negotiated a solution. He agreed to sell his boat (which had been sitting in the car port unused for three years) so that we could pay for the cow and the milking machine. And somehow he persuaded me that we needed a cow. Or maybe it was when I first met Bella that I was persuaded, I can’t remember now.


Pete told our dairy-farmer friends that we were looking for a cow. I didn’t expect them to find us a cow for months, or maybe even a year, but only a few weeks later, they told us about Bella. She had been born at the dairy farm, but bottle-fed by a neighbour and raised as a tame cow, then returned to the farm when the neighbour moved. She was about to have her second calf. She didn’t fit in with other cows because she was so tame. When we first met her in the paddock, she stood still while we patted her, as all the other cows moved away from us. I felt sorry for her! Also one horn was growing in towards her head, poor thing. We couldn’t leave her at the dairy farm!


We went home to get organised. We converted a crush that we were making into a milking bale and chose a milking machine. We ordered stainless steel buckets and a cow brush. We bought milk jugs and cheese making supplies. Finally we were ready to collect Bella about six weeks after she had her calf, Molly.

And so began our inauguration to the world of dairy cow drama. It seems that nothing is simple with house cows! Its not their fault really, they have been bred by humans to make so much milk, they are susceptible to problems with mastitis, milk fever, and they have to be fed properly with plenty of minerals. They do really required more care than beef cattle.

First Bella did not like where we set up the milking bales, so early on the first morning we had to pick them up and move them further from the house and closer to the paddock so we could guide her in there through the gate. We were lucky that she was so tame and would follow a bucket of grain. With two extension cords, we were still able to use the milking machine in that location. Bella has never been easy to milk, we call her “Mrs Kicky” (also “Mrs Picky” when she won’t eat her hay), and was certainly not an easy cow to learn to milk. She also got mastitis early on, which we managed to treat with natural methods. Meanwhile we tried to tame Molly, first by bottle feeding her (that idea lasted a week), and then just by spending time with her while she was eating a small amount of grain.
We didn’t know at first that we didn’t HAVE to separate Molly from Bella. For months we led Molly into a calf yard, and then we realised that they could stay together, which was better for both of them. The only advantage was that Molly did become very tame and also learnt to follow a bucket of grain into her yard.  We actually waited 12 months before we weaned Molly, because we took a while to get organised with getting Bella in calf.  But that is a story for next time.
I'd love to hear your house cow stories!  Tell me all about your lovely cows :)
Read the rest of the story:
The story of our house cows Part 2
The story of our house cows Part 3
The story of our house cows Part 4
Find out more about house cows in my eBook Our Experience with House Cows 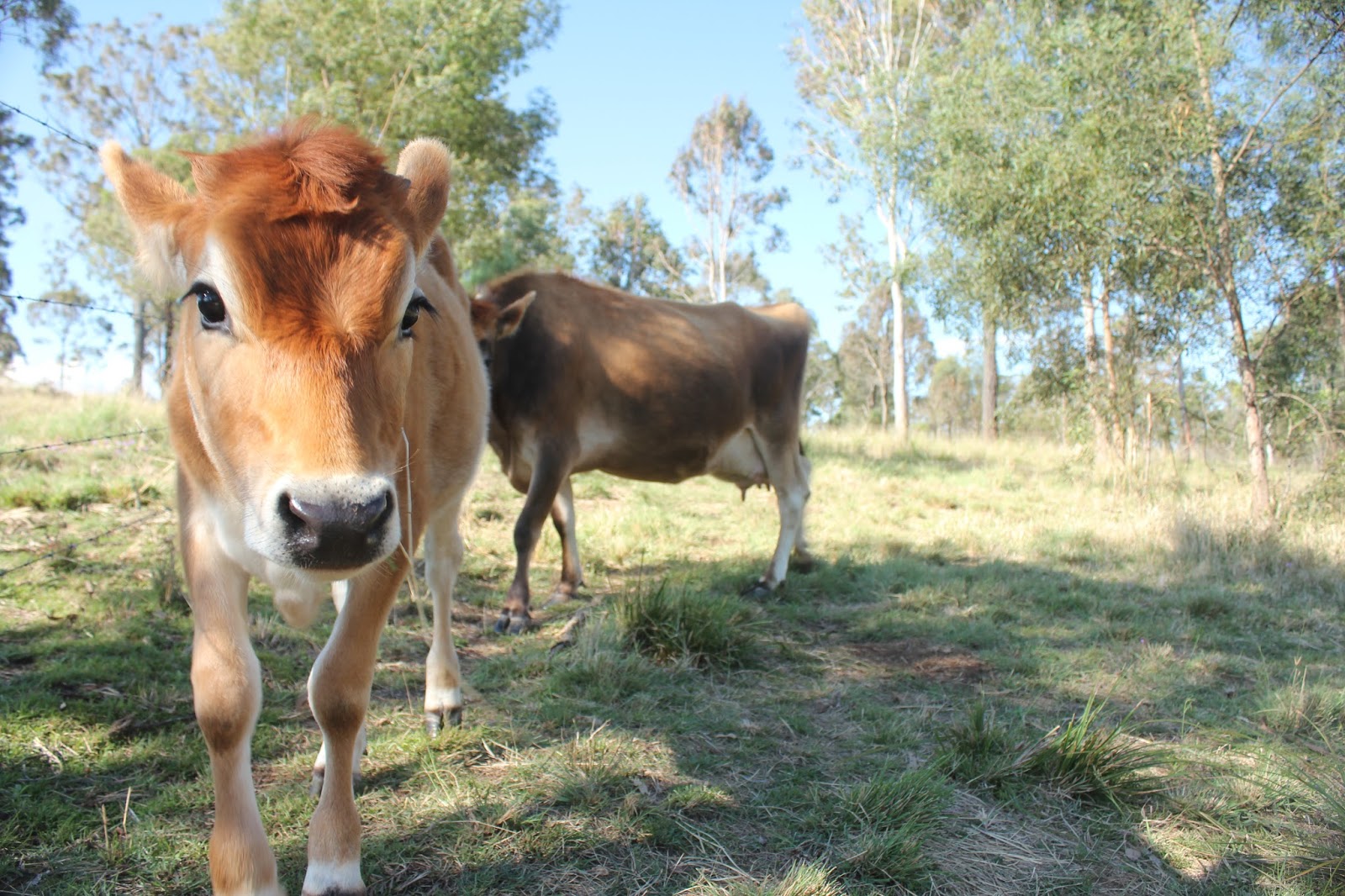 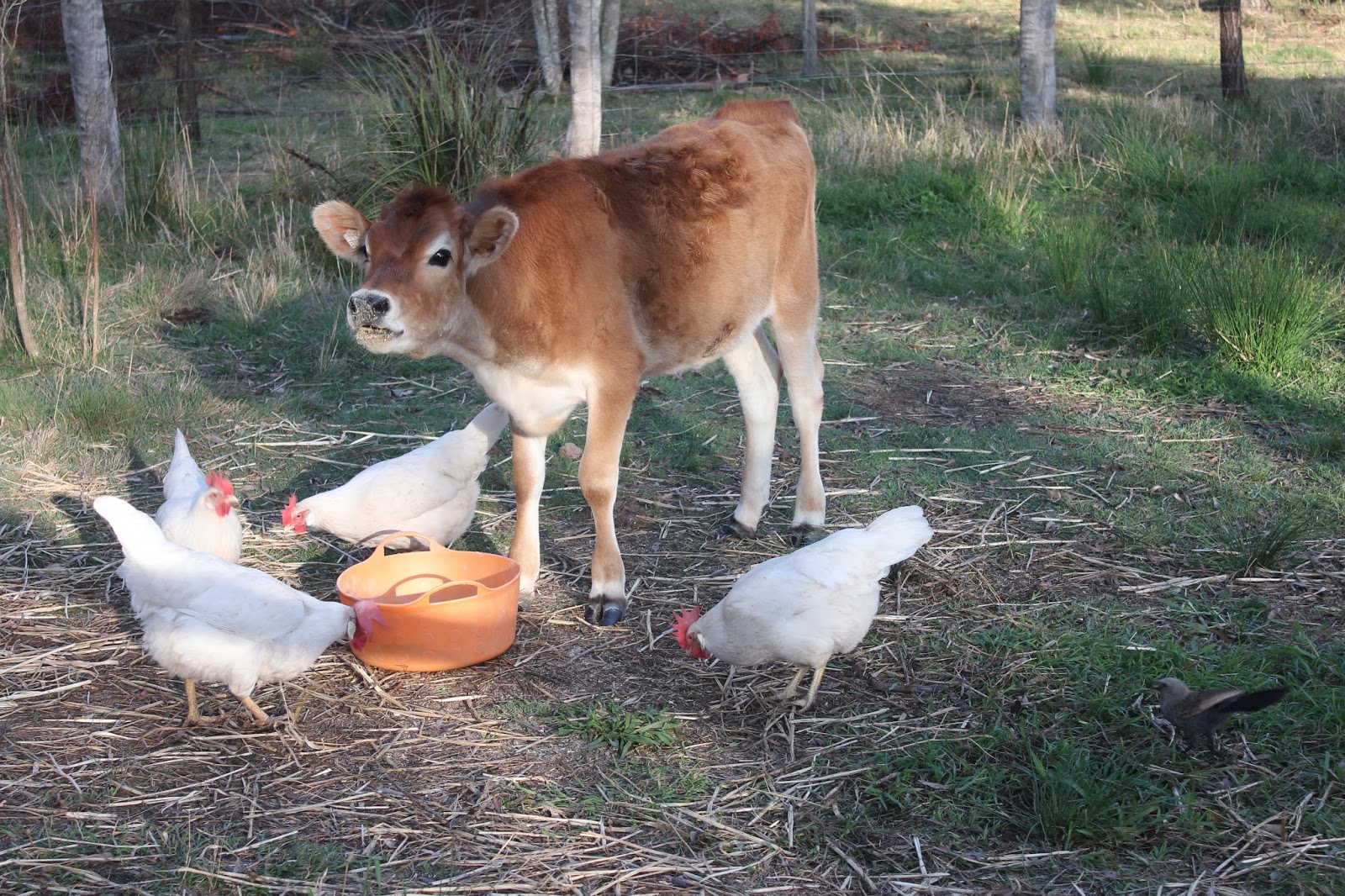 More from: cow house cow
Back to Eight Acres - the blog