I don't have a proper post to write today.   At the moment we are just a bit stunned.  Pete found Molly dead on Monday when he heard her calf bawling.  We don't know what happened to her.  She had starting losing condition due to feeding her calf (we haven't been milking) and we had just put out hay to make sure that everyone was getting enough to eat.   We don't know if there was an underlying condition, or that something else affected her while she was already weak, but she didn't seem deathly ill to me when I chatted to her on Sunday afternoon.  I googled it and there are over 200 causes of sudden death in cattle, so we will probably never know for sure.
Her absence is still sinking in.  I've stopped looking for the cow with horns when I do the herd check.  Her calf is, fortunately for us, about 3 months old, so can be weaned as long as he gets enough hay.  He is wild and there is no way to catch him at the moment without making everyone walk through the yards again, he's with the rest of the herd and seems ok.
Molly came to our property in 2011 as a six week old calf with her mum Bella.  She grew up to be the best milker, always happy to stand patiently while I put on the milking machine, and she made plenty of milk for us and her calves.  Molly was MY cow, I spent the hours sitting in the yard with her to keep her tame for milking and she would always come to me for a scratch (and I learnt to avoid her horns when she was excited).
I'm actually not as upset as I would have expected, I think a sudden death is easier in some ways because I didn't have to watch her suffer or try to nurse her or decide to euthinise or not, the decision was made and she is gone and we have to get on with things.
Thanks everyone who left lovely messages on my Instagram and Facebook post.  A house cow is very close to a dog in status, very nearly more a pet than livestock, and I thought she would be around for longer than six years.  I really appreciate the kind thoughts.
Here's what I've written about deadstock in the past....  Anytime you have livestock you have deadstock and it sucks, but most days are better than this.
I'll write another installment of "the story of our house cows" next week.... we still have Bella and the babies (Rosey and Charlotte), so this is not the end! 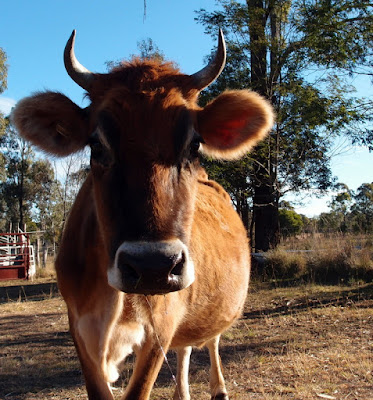 END_OF_DOCUMENT_TOKEN_TO_BE_REPLACED

I first bought a slow cooker after our first experience butchering a steer at home. Unfortunately, we were not aware of the importance of not stressing the animal prior to...