Mealtimes
Dogs must sit and wait for a command "tucker" before eating their morning meal.  We also teach them "don't touch" before eating.  This command then applies to food and animals (chickens, cows etc) and anything else they shouldn't eat.  We will also be teaching him that we can take food dishes and bones away.

Dog Food
As I wrote back here, the dogs are fed minced offal with grated carrot, green vege (currently choko), seaweed and eggs.  If we run out of the homemade food, they get a grain-free dog kibble (dog nuts!).  Gus eats TWICE as much as Taz and sometimes steals her food (although she's started eating way quicker than she used to).  We have a few sources of beef offal (apart from our own beef) and may get a licence to shoot roos to feed to the dogs in future.  The dogs also get a bone each in the morning as we're leaving for work (helps to distract them and good for doggy teeth).

Walking with humans
We take the dogs for a walk in the morning.  Lately Taz has got the hang of "walk behind" and will stay with humans instead of running ahead (it looks like it takes all her self-control to achieve this, and she was not able to do it until recently at age 2).  We have a front-clip harness for Gus, and so far it really works, any time he tries to pull on the leash it just turns him around.  I still think is going to be important to train Gus to walk with us as Taz now does, because when he is fully grown he will probably be strong enough to pull us along.  I feel the same about halter training house cows.  If a 500kg jersey cow doesn't want to come with you, pulling on her halter won't help you!


Doggy Playtime
If you haven't seen dogs play before, you might be surprised how much growling and biting there is (some great photos here on Ohio Farmgirl's blog).  It can turn nasty though (as one person commented, sadly her large dog didn't get on with their other dogs and had to go), so we do need to keep an eye on this as Gus grows.  I'm trying to maintain Taz as the alpha dog by feeding her first and giving her lots of cuddles, that way Gus might respect her as the leader. 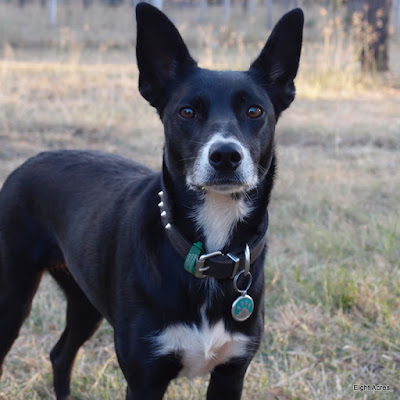 Not spoiling dogs
I totally agree with the comment about dogs ending up in shelters.  It seems to be around one year old that people realise their big spoiled dog is going to be a terror.  Barking, jumping and other bad habits need to be discouraged when they are young.  The best way to stop jumping is to put pup on a leash and stand on it when he tries to jump.  I've been doing this at mealtimes.  When Gus bites my hand I yelp at first, and second time he gets a smack on the nose, he has learnt not to do that anymore.  Taz has also taught him some manners when he bites her too hard, she really tells him off. 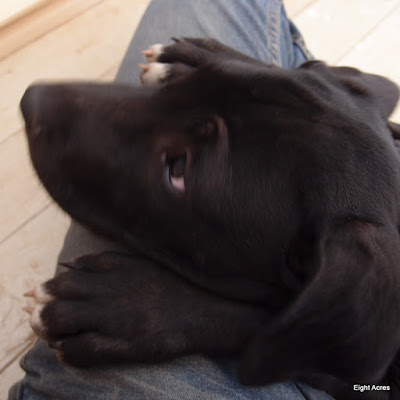