garden hydroponics
As I wrote a few months ago, towards the end of last summer we got tired of having no successful tomato plants in our vege garden and set up a hydroponics system.  We've been running it nearly continuously ever since.  The tomatoes did die off in August when we had a heavy frost, but we replanted as soon as it warmed up enough in September.  The joys of a sub-tropical climate!

I am so happy we set up the hydroponics, we have had nearly a continuous supply of tomatoes, and once its set up its very easy and cheap to run.  I wrote all about the system we use in my last post.  This time I just want to share a few extra tips that I've learnt since we've been running the system again.

Monitoring nutrient levels
While you can set up the hydroponics system quite cheaply (any large reservoir, a pond pump, some old pots and gravel, and you're away), you do need to spend a bit of money on a conductivity meter to monitor the nutrient levels.  You can just change the water every time it gets low, refill and add the amount of nutrient recommended on the bottle, but some veges prefer different levels of nutrient.  If you want to save water and tailor your system to suit what you're growing, its best to invest in a meter.  I recently replaced our small cheap meter with a new fancy one as the old one had stopped working.  It had a bad habit of draining batteries if we left it on, but it had lasted 5-6 years (with multiple battery changes).  This new one does conductivity and pH, it also auto-scales, with no conversion required.

I bought our one online from Instrument Choice, and they seem to have a good range.  If you're in the US, here is an Amazon Affiliate link to a very similar meter (we can't buy it from Amazon in Australia)  and this is similar to the model that we used to have.  The main thing to look for is the range of the meter.  For hydroponics you need to be able to measure around 1 to 5 milliSeimens (mS).  Most meters seem to range 0-2 mS (0-2000 microSeimens) or 2-1000 mS, so you need to get one that goes across both ranges, or the higher range if you have to chose just one option.

Tomatoes need nutrients at 2-5 mS.  I top up the tank about once a week, test the water, add approx the amount of nutrients on the bottle for the amount of water added, and test the nutrients again, adding a bit more nutrient or water as required.  As long as they are around 2-3 mS the tomatoes seem to grow really well.  For a while we had some confusion of the scale on the meter and were not putting in enough nutrients and the plants did not do well, so it is worth having a meter and knowing how to use it!  If you are putting in too much or too little its very hard to tell by looking at the plants.

Succession planting
You don't have to wait for all the tomato plants to die off and start again with all new plants.  I have just been pulling out any that die (we started with three different types, so some lived longer than others) and replacing them with seedlings.  I was lucky over summer that we had some rain and compost tomato seedlings were coming up in the garden all over the place.  I just grabbed a seedling the right size and put it in the empty pot.  There's no seedlings left in the garden now, but a tomato that fell on the hydroponics tray sprouted more seedlings, so I replanted them last time I needed some.  If you don't have any volunteer seedlings, you just need to remember to start a few seeds every couple of months so you have some replacement plants to chose from (or buy a punnet). 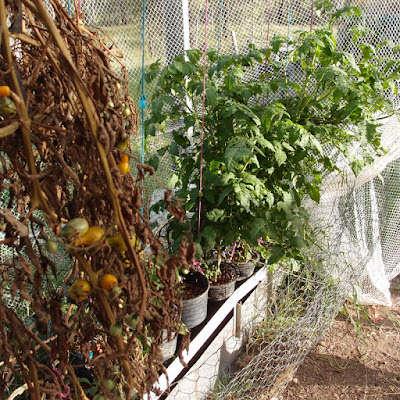 Using worm leachate
Last time I wrote about my  concerns about having to buy hydroponics nutrients, both the expense and not really knowing where they came from.  We have had good results with an Australian made nutrient called Bloom  (here is an affiliate link to a similar product on Amazon).  It contains synthetic fertiliser as well as some organic matter, the website says "Chelated macro and micro trace elements, fulvic acid and vitamins".  I also add leachate from our worm farm (worm wee (I know its not really wee, but people call it that and leachate sounds boring)).  I think its important to add some organic chemicals and and microbes that the plants would normally access in the soil.  This seems to help them resist pest and disease.


Keeping out the birds
Speaking of pests... the main problem we've had is the local king parrot population.  They discovered our tasty tomatoes early on and Pete rigged up bird mesh around the hydroponics system.  We already had the chicken mesh around the bottom to keep out the chickens.  Hydroponics systems need access to sunlight, but shelter from rain (which would dilute the chemicals).  We have our system in the carport that we extended for the aquaponics system - the roof is lined with plastic roof sheeting, they would also work in a greenhouse. 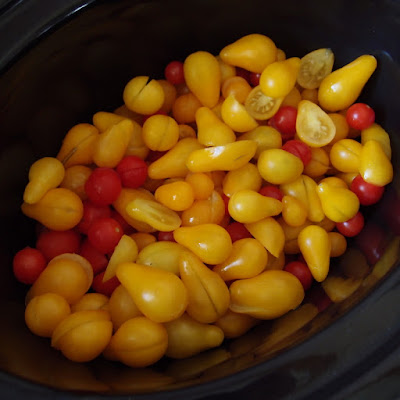 Using up the tomatoes
With all those lovely tomatoes coming in I have to find ways to use them!  There's no point canning or preserving if we're just going to pick more all year.  I have been throwing them into all sorts of dishes, from the obvious tomato sauce with mince, to any sort of curry, casserole or roast gravy.  I sometimes take them to work to give away, but usually we can manage to eat them all.  I did dry a few at the start and occasionally dried tomatoes are something a bit different in a casserole.

Now that the shed is up at Cheslyn Rise we can start to think about setting up our aquaponics system!  It has been sitting in our shed for about four years, so this is pretty exciting!  If you want to know more about aquaponics, this book is really good (Amazon Affiliate link).


Have you tried hydroponics?  Any tips to add?  How do you use up tomatoes?


(A few Amazon Affiliate links below, I get a small credit from anything you buy through my links, thanks for supporting my blog)

More from: garden hydroponics
Back to Eight Acres - the blog