soap
I may have mentioned this before.... soap making is addictive!  Once you start, you just want to keep making more soap.  And not the same soap, you want to try all sorts of different soaps.  I made the mistake of joining a facebook group called Saponification Nation and now my facebook newsfeed is full of glorious soaps, in all colours and shapes, which makes it even harder to resist the urge to experiment.  One soap that kept popping up a few weeks ago was soap made with beer. 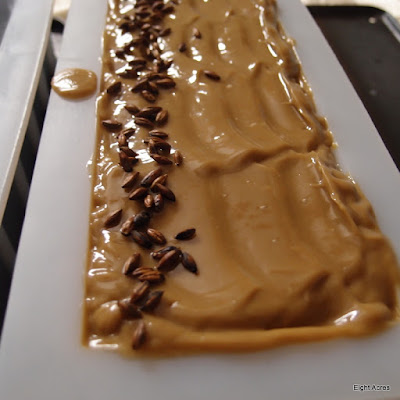 I generally prefer not to use ingredients just for the sake of it, I like to know that they are adding something to the properties of the finished soap.  As you know, I don't like to use artificial ingredients either (colours or fragrances).  When I read about beer in soap I found out that beer adds sugar to the mixture, which increases lather.  I use tallow in my soap, which has limited lather, so anything that adds lather could improve the soap.  It also contributes a tan or brown colour to the soap depending on the beer and the concentration.
For this soap I used Coopers stout, which is a rich dark beer.  Before making soap, the beer must have no bubbles left, so you can either leave it in an open vessel for a few hours or boil it and let it cool - this also increases the concentration of sugars and colour.  I chose to boil the stout for about an hour, which reduced it to around half the original volume.
I didn't add any fragrance to this soap as I wanted to try using oil infused with hops.  I had some hops in the fridge from our beer-making hobby (I also had some toasted barley, which I used on top of the soap).  I infused the hops in olive oil using the waterbath method, and the oil smelt very hoppy before making the soap, however the fragrance did not transfer to the finished soap, or only a very subtle whiff anyway. It mostly just smells faintly like scorched beer. 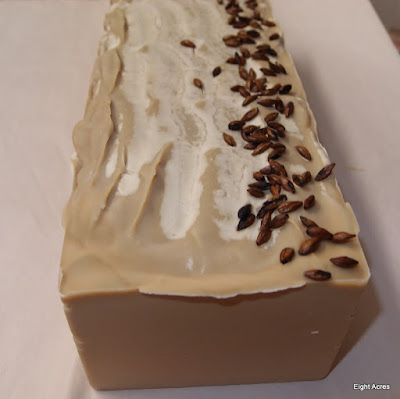 To use the beer in the soap, you replace the water in the lye solution with beer.  As the caustic soda dissolves in the beer, the sugars scorch, which causes the smell.  Next time I will use an essential oil to cover this (the same thing happens with my coffee soap).
Tallow Beer Soap Recipe
This is the recipe I used, but you can just substitute beer for water in your favourite soap recipe if you want to use different oils.
900 g beef tallow
100 g olive oil infused with hops
131 g caustic soda
300-330 mL flat beer - I used a dark stout, which I also concentrated
Roasted barley to top

More information in my ebook Make Your Own Natural Soap 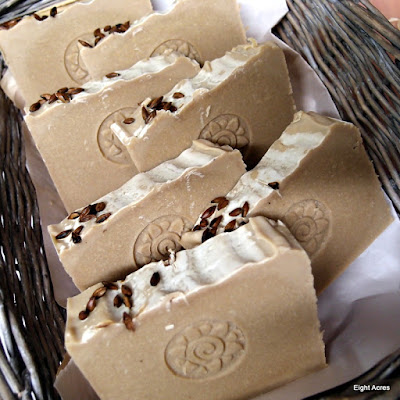 The results of this experiment were interesting.  I love the colour.  As I said above, the hops smell didn't really come out in the soap.  The lather is no different from plain tallow soap I think.  I'm not sure if its worth the effort of preparing the beer, but it is a nice gimmick for a gift, particularly for men (although some may prefer to have the beer separately).
What do you think?  Have you tried making soap with beer or other weird ingredients? 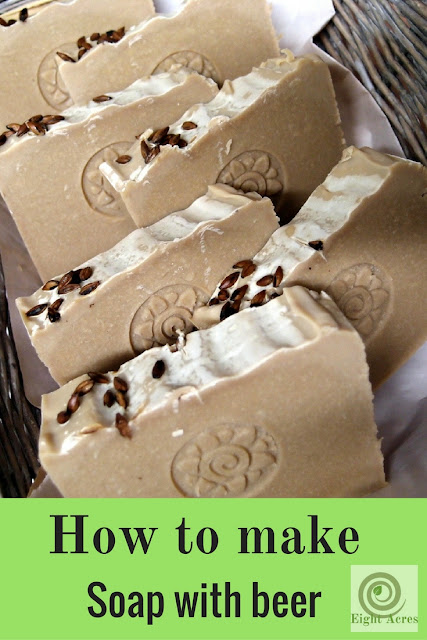 More from: soap
Back to Eight Acres - the blog

How to use a soap shaker