While honey is not the only product from a beehive, its the one that most beekeepers are interested in and it usually takes a year or so to let the bees build up numbers and store enough honey before there is enough to harvest.  You can buy my beeswax and honey here.
There are a few different ways to extract honey from frames.  We have a manual turn 2-frame certifugal extractor.  A lot of people with only a few hives will just crush and strain the comb.  This post is about how we've been extracting honey so far (four times now), and there are links at the end to other bloggers who use different methods so you can compare. 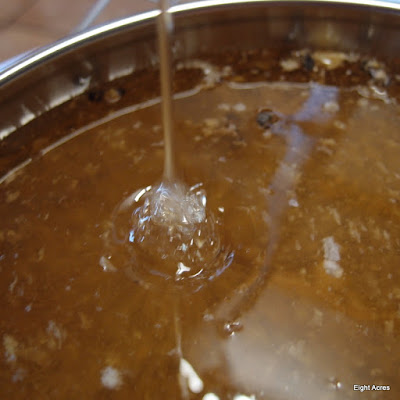 Effectively the honey is emergency food stores for the bees, so you have to be very careful not to take too much from the hive.  You need to be aware of what is flowering and going to flower next and the climate.  Particularly in areas with cold winters, where the bees cannot forage for some time.

We are lucky to have something flowering most of the year and can take honey in Spring and Summer.  You can take any frame that has more than 70% of the comb capped (sealed),  Don't worry if there is some brood on the comb - you will strain that out, but make sure you don't take the queen!  We stopped using queen excluders (that stop the queen getting into the top box) as it seemed to make the hive weaker. 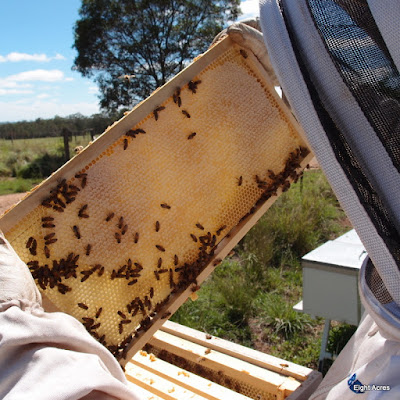 We put the frames that we are taking into a clean empty super, with a spare lid underneath, and put an escape board on top.  You can brush most of the bees off the frames, and then the rest will fly out of the escape board (it lets them out but not in again) and this means that MOST of the bees won't be joining you when you're extracting the honey. 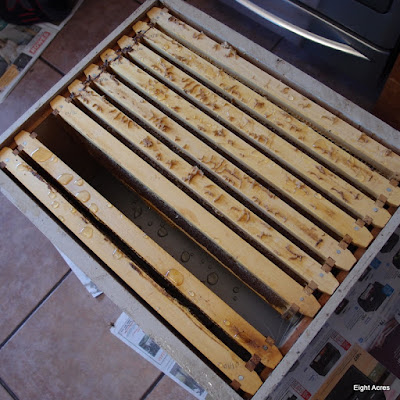 We use a hot electric knife to uncap, you can also get steam knifes or use a scraping tool.  I have the scraping tool for doing little areas that the knife misses.  Pete operates the knife and aims to get MOST of the uncapping beeswax and honey into the bucket.  We got this neat little plastic board that fits over the bucket and holds the frame, really helpful! 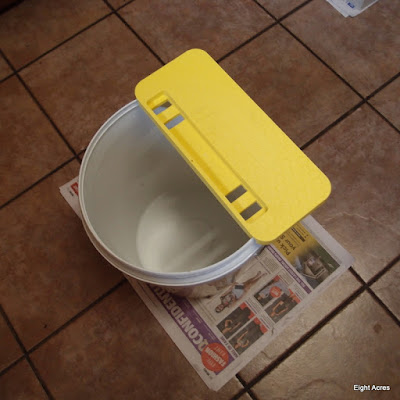 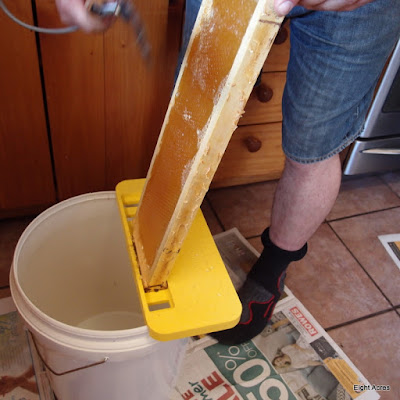 Load up the extractor

We can put two frames in the extractor at a time.  It works best if the load is balanced, so make sure you have the frames loaded opposite ways.  Sally wrote a great post for me before we ever extracted honey and I think of her wise words as I spin the extractor:

Spin the first side at half speed and only for a few turns to release half the honey in that side. Then stop, remove each frame, turn it around to its other side and replace into the extractor so the honey is being spun from the other side of the wax. Then spin the honey out gradually gathering more speed. Then turn the frames back to the first side again to remove the remaining honey in that side. This is to prevent breaking the wax as the weight of the honey and the centrifugal action forcing the frame to the outside is too heavy for the wax to remain in one piece. The least breakages in the wax means the bees can spend less time repairing the wax and spend more time gathering nectar and pollen to make honey. 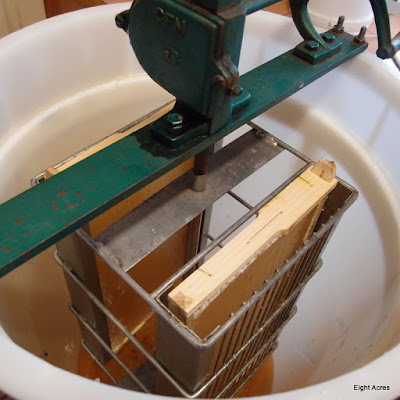 We got some nice stainless steel sieves for straining the honey into the first bucket, its easy to keep them clean by pouring boiling water through when you're finished. 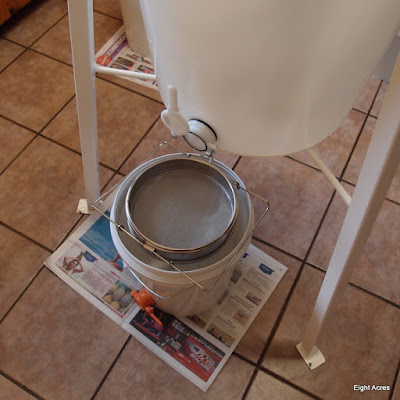 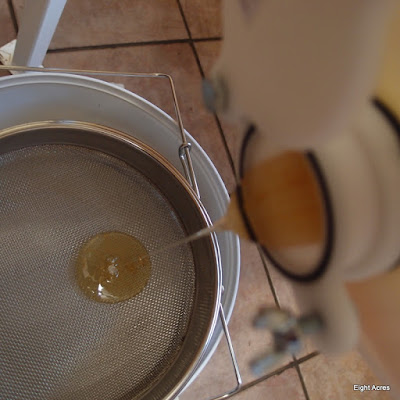 Bottle and label your honey

I got new jars for our honey, I think that's nicer for customers, but we re-use plenty of other glass jars for our own use and to give to friends.  Research the labeling requirements in your state, we have to include the word "honey", the date of processing, our address and the country of origin.  More info here. 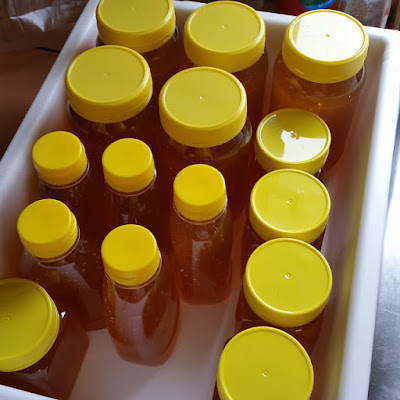 Clean up the sticky mess

Lots of hot water is required to clean up all the sticky honey before the ants find you!  When the honey in the extractor is strained I then strain the cappings honey and melt down the remaining beeswax.  You can buy my beeswax and honey here.
That's basically all there is to it.  Have you extracted honey?  What method do you use?
Here's some inspiration from other bloggers:
Homestead Honey - How to harvest from beehives
Lovely Greens - How honey is extracted from the comb
Lovely Greens - Crushing and straining honey
Countryside network - DIY honey extractors
Schneiderpeeps - bees (an update)  - with photos from a crush and strain experiment
Better hens and gardens - 1st honey harvest 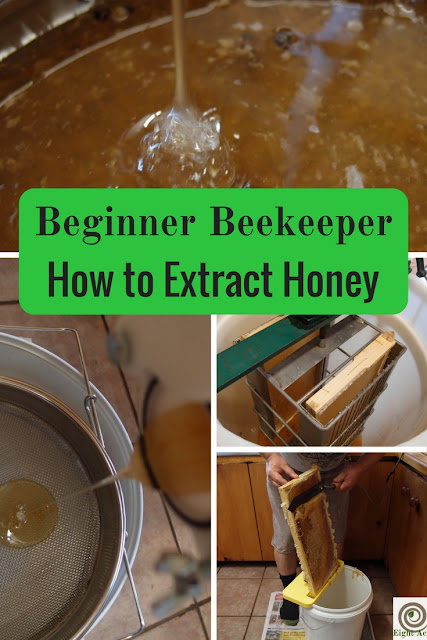