Its about time for another update!  This is the post where I try to give you a bit of a taste of everything that's been happening at our place over the past month.  I'd love to know what you've been up to as well, please share your update in the comments :)

Food and cooking
With some cold weather during July it was definitely time for some pumpkin soup (recipe from The Eat Drink Paleo cookbook).  We also culled two roosters and three old hens, so we minced the meat and made some wonderful thick stock with all the carcasses, look at all that gelatin!  (Here's what we do with the older birds).  You really can't go wrong with soup when you start with a stock base like that.  If you're not making your own stock yet, I think its the one traditional cooking technique that is really worth the effort for both improved taste and the health benefits of eating all that gelatin and minerals from the bones.

Land and farming
We have been spending a lot of time walking around out property looking at the trees.  I have spent years trying to engage Pete in conversation about trees, and now that he is interested I am nearly sick of trying to figure out if that ironbark looks like a slightly different species to the tree next to it because the leaves are a little bit different!  We certainly have a diversity of trees on our property, and while other farmers see trees as a liability - just taking up space where they could be growing grass, we think of it as an opportunity to add fertility to our property, provide habitat, firewood, building material, and now bee-food!  Many of our native eucalypts flower in winter, so we actually have year-round nectar and pollen for our little 5-frame bee hive (nucleus or "nuc" for short).  We checked the nuc for the first time on a warmer day, and were a bit nervous with our bee-suits on and the smoker ready, but they were very calm bees and let us have a good look at what they've been up to.  Two frames of brood, one of honey and two more on the outside that they were still drawing out, so we need to get moving on building a bigger box for them before they fill up their nuc.

We also finally got a tank for the high point on our property, which is the beginning of the second phase of our solar bore pump project.  Phase one was to install the pump and see if it could pump to the top of the hill.  In phase two we are going to run irrigation pipe from the tank down to the house.  Checking the 1km pipeline from the bore to the tank provided yet another opportunity to look at trees!  Now we just need to set up the rest of the pipeline.  I'll write more about the solar pump soon, now that I know that its all working properly.


Chickens
We culled the older chickens and now we are left with nine hens from last year, and 16 that hatched in February.  The new ones are starting to lay already, so we are getting 10 eggs a day at the moment, and its only mid-winter.  I am going to have to find some more customers in Brisbane!  We still have seven roosters from our hatch, and one lovely Rhode Island Red that was given to us.  I've picked one of the seven (a pretty orange one called "Lucky") to move into one of the hen tractors, but the rest will be ready for the freezer very soon. 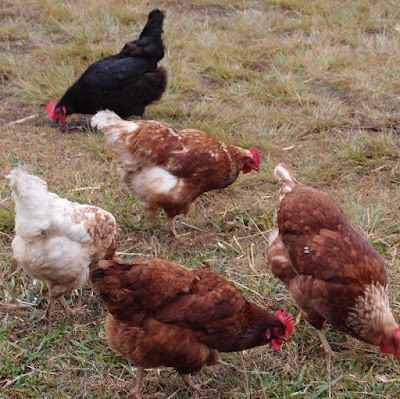 Cows and cattle
Molly had her little calf one evening.  Pete called me and said he was pretty sure that Molly was in labour, and about an hour later he called to tell me that the calf was born and safe with Molly.  That was very happy news.  Over the next few days Pete thought the calf might be a girl, then a boy, and then a girl again.  When I got home I was able to confirm that she was a girl!  Now we have seen two births, we are more confident that we can recognise a cow in labour.

Molly did not suffer the same swelling that Bella had, and Pete didn't milk her right away, she came over to the milking bales to be milked the next afternoon, and then the afternoon after that, when she was ready.  It was nice to let her decide when she needed to be milked.

I named all the calves because I was sick of Pete calling them "it". The Aussie Red cross is called Rosie and the super friendly Jersey calf is called Charlotte (its very difficult to get a photo of Lucy when Charlotte keeps sneaking up behind you and licking your arm). We are still milking both cows, the poddies recovered from the paralysis tick poisoning and are taking 3-4 litres each morning and afternoon, I have seen Charlotte licking Bella's udder, but if she goes for a teat she gets a kick. Lucy is suckling from Molly and we are taking a litre here and there for ourselves.
The Angus cattle at Cheslyn Rise are wonderful, it seems a shame to have to sell them!  They are so tame, they followed us all along the pipeline when we were checking it and waited by a fence when they couldn't go any further.  We have taught them that the ute brings lucerne hay, so when they here the horn they come running.  Have tame cattle is a pleasure.


Three Years In The Making - The Browning Homestead

Ohiofarmgirl's Adventures In The Good Land: Not every body gets to stay. Goats. Gone.
adventuresinthegoodland.blogspot.com


Garden
We've had no rain in July and plenty of frosty weather, so everything is dry and dusty, apart from in the garden where we sprinkle the grey water.  Its weird to be in the middle of winter with a bumper crop of tomatoes (thanks to hydroponics) and the start of the strawberry season, such is the joys of growing food in the highland sub-tropics!  This month I am still harvesting plenty of greens, although many have started to flower (bee food!), the peas are taller than me, but not much to pick.  The broad beans are flowering and smelling wonderful.  And I seem to be able to grow broccoli one small floret at a time, but if you pick enough you get a meal.


House
We made a start on some demolition work at the house, removing the kitchen cabinets and stripping the bathroom and toilet back to bare walls.  Its much easier to sit in an empty space and decide where things should go than to envisage it while all the ugly bits are still there.  We have some good ideas, we just have to figure out how to make them happen!  It was fascinating to see what was behind the cement sheeting (fortunately turned out it was not asbestos in the bathroom) and we could see where doorways had been moved and work out where rooms were in the past based on the paint colours.


How homes kept cool before the age of AC
blog.solarcity.com

Permaculture - Catch and Store Energy
Energy is defined very broadly in this case, encompassing both the obvious heat and electricity, and less obvious forms of energy, such as water, trees, seeds, food and fertile soil. This principle is important because we live in a time of energy abundance due to the availability of cheap fossil fuels and it can be very easy to forget to plan for energy catchment and storage. We have become accustomed to buying what we need when we need it because fossil fuels have made this such an easy option.
Some of the ways that we catch and store energy:
house of simple: Vintage Safety Razor Shaving
house-of-simple.blogspot.com

Create (and Support Me)
Lately I've been making some extra soap because I'm keen to start selling it.  I am waiting until September as I have to pay for a licence *grumble grumble* which is September to August.  I already have a few things in my Etsy shop, including a few balms and salves, and dried herbs.  My lovely neighbour and friend has started a massage clinic in Nanango (Maintain and Align Massage) and she has found the "Relax Massage Balm" to be very popular.  Its made with essential oils that relieve inflammation and encourage blood flow and healing, so its great for sore muscles and joints.

I am also very nearly finished with my eBook "Design and Use a Chicken Tractor".  I have a couple of friends proof-reading it at the moment, and then I just need to do a final edit before I put it on sale.  It will be good to have that finished, it seems like it takes a LONG time to write a short eBook!

END_OF_DOCUMENT_TOKEN_TO_BE_REPLACED

In Australia, bee boxes are usually made from hoop pine, which is an inexpensive soft wood. The only problem is that it is prone to wood rot in hot humid...

Every year, no matter if it rains or not, we need decisions to manage our stock feed through the winter. We need to ensure that we have the right balance...

How and why make natural beeswax wraps

When Joel Salatin came to Queensland...In August 2011 Pete and I left Nanango early headed for Beerwah (Sunshine Coast) to attend a workshop with Joel Salatin of Polyface farm, he's a...